Herb Haun of Haun Packing in Weiser, ID, said the 2016 crop is sizing up well, and stands look healthy. “We’re still looking at an Aug. 8-10 harvest,” Herb told OnionBusiness.com on July 6. “So far we haven’t had any big pest issues, and there’s been plenty of water.”

L&M Cos.’ Colorado crop in the Arkansas Valley is coming along well, and Derek Ennis said the operation is looking at an Aug. 15 harvest start date. Light volume will start shipping a couple of weeks after harvest starts, he said, noting that L&M will transition from New Mexico to Colorado and Kansas at that time.

Don Ed Holmes of The Onion House in Weslaco, TX, said his company’s Western Slope Colorado deal will start the last week of August with onions out of Olathe. Grower John Harold said it’s been a fairly wet summer with warm temps, and there is slightly less volume of the intermediates due to some hail damage.

Derek Ennis with L&M Cos. said the western Kansas onion deal will start its harvest around Sept. 1, with first loads to ship about two weeks after that. As with the Colorado deal, the initial volume will be light, hitting a couple of weeks after shipping starts.

Don Ed Holmes of The Onion House in Weslaco, TX, said onions out of Corrine, UT, will start storing on Sept. 15 and will ship the first week of October. “It’s been warm there, and they are on track with a few more yellows and a few less whites and reds,” Don Ed said. 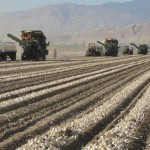