Cindy Elrod of Peri & Sons Farms in Yerington told us that the Nevada deal will commence the first or second week of September. “So far I’m hearing really good reports,” she said of the new crop. “There hasn’t been anything negative.” Heat has manageable, she said, and Cindy said that as in the San Joaquin Valley, crews will harvest the Nevada onions at night. Organics will start coming out of Nevada in September, and she said the California organics have wrapped up and that PSF is sourcing during the period between CA and NV. The certified onions will run through March with the entire Nevada crop. Sweetie Sweets will go into December, and then the PSF Sweets will ship for the remainder of the season, Cindy said.

John Vlahandreas of Wada Farms said the Wada Washington operation is gearing up and will be ready to go on July 18.

Larry Bauman, owner of L&L Ag Production in Connell, WA, reported that the crop in the Othello area is “progressing well under a more normal weather pattern in June than last year.” Larry said, “Our crop may be a little further along than normal due to an almost perfect spring.”

John Vlahandreas of Wada Farms reports that Wada will start shipping onions out of Brooks, OR. On July 4. He told OnionBusiness.com the onions in Brooks are very good quality. “We have a great grower in the area that has done a very good job with the crop this year,” he said.

Steve Baker at Baker Packing in Ontario, OR, said that several weeks ago, there seemed to be some variance in stands, but the crop is progressing well and overall appears to be in good shape. “Mother Nature permitting, we will be ready to go with area onions in mid-August.”

Ken Stewart at Four Rivers Onion Packing in Weiser, ID, said the crop looks to be “most good, some average.” He said, “There are some fields with spotty stands. The weather is hitting above 100, and it will be very critical to keep the right amount of water on the onions.” 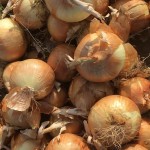