California:
Danny Garcia at Telesis Onion Co. in Five Points told OnionBusiness.com on Nov. 9 that all the seed is in the ground for the 2017 crop. “We’re already preparing for next season and are increasing our reds by 25-40 percent,” Danny said. He said the farm will have more than 700 acres for harvest in 2017 in yellows, reds and whites. The shipping season historically runs from late May through late August.

Imperial Valley:
John Vlahandreas at Wada Farms in Idaho Falls, ID told us, “We are fully planted in the desert as of last week, and we will see what the winter brings us for a growing season. Plant and wait, that’s all we can do now.”

New Mexico:
The overwintered onion crop at Carzalia Valley Produce in Columbus, NM, is “right on the verge of going dormant,” according to James Johnson. James said on Nov. 9 that everything looks good for the crop, and harvest is planned to start in mid-May. James commented on the Nov. 8 election, with results only hours old, by saying, “I believe last night the anti-establishment was heard.” He said he hopes the country goes in a new direction and added, “I’m happy.”

Mexico:
Dale DeBerry at AllVeg Sales in Bourne, TX, told OnionBusiness.com the Tampico crop is “all in the ground,” and he said some of the growers will thin and also put in transplants. Harvest and shipping will start in early March with all sizes and colors, “normally heavy to jumbos,” Dale said. “We have sweets and regulars, yellows, reds and whites.” Dale said the weather in Tampico has been favorable for a good crop. About the election, Dale said, “I’m happy. I would have hated to move to Costa Rica even though I love it there.” 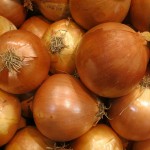