Stuart Follen of SL Follen Co. in Portland, OR, told OnionBusiness.com on Nov. 9 that the onion export market is weak, with primary U.S. movement into Taiwan.

He added that there has also been some movement into Hong Kong and Australia, but the Australia shipments will likely come to an end this week. Regarding Japan, Follen said the Chinese are shipping into Japan for processing, adding, “Their crop is inexpensive and plentiful, and though the Japanese won’t market Chinese onions on the shelf, they will use them for processing.”

We asked Stu about the status of Japanese onions and crop impact from the August and September typhoons in Hokkaido, and he said that Japan has dropped its domestic onion pricing in order to move supplies quickly both domestically and some into Taiwan. Follen noted there is concern in Japan that the water-damaged onions (onions that were literally under water, he explained) will not store.

Stu said he is “100 percent sure that Japan will be importing onions,” but he noted that how that all plays out will be dictated by timing.

If Japan doesn’t start importing onions until the New Zealand crop comes on, it could present a problem for U.S. onion exports because the Japanese may favor the new crop.

“One thing the Northwest has going for it this year is that the onions have excellent quality and the price is very good. If the United States has to compete with New Zealand, that quality and pricing could be a big help,” Stu said. He further noted that there could be some export opportunities for larger U.S. onions to Europe, explaining that Spain does not have as many large onions as in previous years. There could be opportunity there, but it will depend on whether U.S. shippers want to deal with the 30-day transport to Europe and competition from Chile. It will also depend on whether the Europeans decide to settle for smaller onions.

In addition, Follen addressed the Hanjin bankruptcy and said that Hanjin’s competitors have picked up the slack on freight availability, making the most of Hanjin’s misfortune and raising freight rates. And while the rate hikes are not substantial, there is another freight increase set for December.

He said the pending hike has created a somewhat false increase in export demand, because importers are stocking up now to avoid the December hikes.

“Right now, it looks like importers are placing multiple months’ worth of orders and then will then will just hold back when the freight hikes go into effect,” Follen said. He summarized the report by saying, “There is definitely hope for an increase in U.S. onion exports, but right now it’s a ‘cross your fingers’ market, and we will just have to wait and see how it all plays out.” 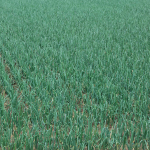