GEORGIA/Vidalia:
Chris Woo with Potandon’s Ontario, OR, office said he has checked in with Potandon growers Ray Farms in Vidalia, and he said “reports are good for the their transplants.” He added that currently the growers are waiting for sizing on the transplants with a target of Thanksgiving to plant the crop. As a result of Hurricane Matthew, the area did receive some wind and rain, but Chris said the rain was welcome, and “it had absolutely no negative impact on the transplants.”

TEXAS/Rio Grande Valley:
Chuck Hill with The Onion House in Weslaco told OnionBusiness.com that that operation is into the second week of planting for its spring new onion crop.

CALIFORNIA:
Robert Bell with Camarillo-based Western Onions reports from Cuyama that crews are “still chugging away at 700,000 pounds a day trying to finish up by the end of the month.” The crop is all organic, Robert said quality and size are good. “We have had a little difficulty getting the onions to cure in the ground without undercutting like usual so we stopped for two weeks at the end of September and are now going seven days a week until finished,” he said. Robert noted that “perhaps we will adjust our planting date next year. With this variety we are told we could plant a couple of weeks sooner, but for the last five years the date we used worked fine.”

MEXICO:
Mike Davis with Tex-Mex Sales in Weslaco reports that their Mexican crop is progressing nicely, and they have had very good weather this season. He said harvest is scheduled to begin around Feb. 1. 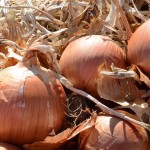