MICHIGAN:
From his Hudsonville, MI, office, Jon Meyer with Ohio-based Market Brothers reported demand and market have slipped in the last week. Meyer commented there is a lot of pressure in the Chicago and Detroit market due to onions coming in from Canada. “Right now, it is tough to say how that will impact the market in the coming weeks since it’s hard to get a handle on what Canada is doing,” he said. Jon recently visited 10-12 farms and shippers on the west side of the state and reported that even with the extra moisture received early in August the quality of the onions is very good. Jon said he will be visiting the east side of the state in the next couple of weeks, but all reports he is hearing is that they growers in the east had an excellent season, and the quality is great with nice size profiles and a good amount of mediums and even some jumbos.

COLORADO/Western Slope:
Working with several Western Slope growers, The Onion House based in Weslaco, TX, is shipping out of Colorado now, according to Chuck Hill. Chuck said the reds and yellows show both good quality and size, and he said they will ship through February.

UTAH:
Alex Hines with Hines & Company in Layton, UT, told us on Oct. 12 that “demand has been a little slower for the last week and a half.” He commented, “Things should start to pick up when people start eating out more. With kids back in school and people still barbequing, the lighter demand is to be expected.” Hines said that there seems to be more demand for mediums over other sizes, and he said Hines & Company has all colors and sizes available. On quality Hines said, “Quality is very good. This is probably one of the best crops I have seen in years.”

IDAHO-E. OREGON:
According to Chris Woo with Murakami Produce in Ontario, OR, “Demand is moderate this week,” and he said, “Things tend to slow a bit with national holidays (Columbus Day), and PMA week also has an impact on demand.” Yellows in all sizes continue to be top for demand, followed by reds, then whites. Woo said “We are is still focusing on getting the harvest complete.” He added that harvest operations were delayed on Monday due to light rain, and he said more rain is expected this weekend. “If it doesn’t rain this weekend, we should be 90 percent complete with harvest,” he said, noting, “While we are trying to wind up harvest at home, we are looking forward to participating in the PMA expo. It is always great to take time to meet with customers face-to-face and meet with old friends.” Chris will be working in both the Potandon booth as well as the Idaho-E. Oregon Onion Committee booth.

Ryan Stewart at Fort Boise Produce in Parma, ID, said the market has been “a little quiet this week,” commenting that earlier in the week there was a bit more activity, but as people prepared for PMA, it slowed somewhat. “Mediums are still the most popular size,” he said, adding that larger onions are seeing “decent demand.” Fort Boise is moving all colors, and he said the pricing on reds is “a little lower this week.” Whites sized up larger, he said, and reds came in as “an average crop.” Quality is good, and Fort Boise was in its last day of harvest on Oct. 12, with all onions to be pulled from storage going forward.

WASHINGTON:
Trish Lovell with Agri-Pack in Pasco said her operation is seeing “a little export to Taiwan right now, and demand seems to be there.” Domestic demand, she said, is on the quiet side this week. “People have been trying to get their onions in, and storage is full. So shippers are trying to move product, and there is just so much product out there. It’s also quiet going into PMA, which is the same every year. It will pick up afterwards.” She said Agri-Pack is “packing onions every day, and we’re going steady, moving all sizes and colors. The red market is lower, and we’re seeing some sub-standard quality. There are too many reds in the market right now.”

JAPAN:
Back in Pasco, WA, after an eight-day trip to Japan, Trish Lovell of Agri-Pack told us that her visit to the Pacific Rim nation took her to several onion fields, packing sheds and storage facilities. It also included an up-close look at the aftermath of multiple typhoons that hit the Hokkaido area especially hard. “There was quite a bit of damage there,” Trish told us. “Right now it’s just estimates, but they lost a high percentage of onions. Some fields were even washed out to sea.” There was staining in the onions, and storage was a problem. Trish said shippers in that region were “committed to 30,000 tons to Taiwan and Vietnam.” Pushing keeps the price down, and Trish said it also “doesn’t allow the a window of opportunity for exports [from U.S. shippers] right now.” She said she believes such a window will open up possibly in December and most likely in January and February. “It’s still raining in Hokkaido, and it’s supposed to snow in some parts tomorrow,” she said of the region’s ongoing weather issues.

Moreover, growers were trying to dry the onions in metal bins in the fields, but the humidity level was so high that the product wasn’t drying, she said.

Trish said the situation is bad for the Japanese growers and shippers, and she noted, “Unless we [globally] quit overplanting and overproducing, the only thing that is going to save the market is a disaster somewhere.” 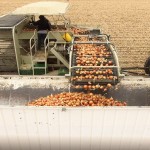