WASHINGTON:
Dan Cummins with Onions Direct in Kennewick reported on the Othello region, noting the area as a whole has some onions left to harvest. He said this year has seen a large harvest with big yields and large sizes. Dan also said quality is looking very good.

COLORADO AND KANSAS:
Don Mameda with L&M Cos. in Rocky Ford, CO, said the Kansas crew has prepped 300 acres and will start planting the 2017 crop in March. Colorado fields will be prepped in December and January for the March planting, he said.

COLORADO, SAN LUIS VALLEY:
Jake Burris with Ponderosa Partnership, the growing arm of Aspen Produce, told OnionBusiness.com on Oct. 27 crews started digging at 10 a.m. on Oct. 25 and had the last truck unloaded at 3 a.m. Oct. 26. This is the first year for commercial production at the San Luis Valley farm, and Jake said the 60 onion acres produced well. The operation, which is a longstanding potato grower/shipper, added onions in a very small test plot in 2015, and the success from that initial effort led to this year’s expanded program. “We gave the crop time to mature,” Jake said, adding the all-yellow Spanish onions sized to mostly jumbos with some mediums. Onions are now a product category for the operation, with incentive for mixed loads. “We will start shipping in December,” he said, noting a focus on onions for the holidays.

NEW MEXICO:
Carzalia Valley Produce’s overwintered onions were all planted during September, and James Johnson told us on Oct. 26 first emergence was noted in early October. Harvest will start mid-May, he said, adding that weather has been mild in southern New Mexico this week. “It’s 87 degrees here today,” he said. “That’s about 15 degrees warmer than normal.”

VIDALIA:
Potandon’s Chris Woo reported for Ray Farms and told OnionBusiness.com that the operation is still working on its onions in seedbeds while focusing heavily on harvesting the peanut crop. Ray Farms won’t be transplanting until the first part of December.

Shuman Produce a major source of Peruvian sweets for retail 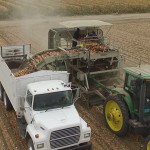