WASHINGTON:
Brenden Kent with Sunset Produce in Prosser reported that the market right now is “lacking.” He said, “With export markets as well as domestic markets full, there isn’t a lot of demand.” He also said he anticipates holiday demand will increase movement, and the market should start to stabilize, possibly by the middle or end of next week.

IDAHO-E. OREGON:
Dwayne Fisher with Champion Produce Sales in Parma, ID, said harvest there is complete and everything is all in. He said quality is very good and size profiles are large. Dwayne noted, “Long-term this could create short supplies of mediums and potentially on jumbos as well.” On the market he said, “We aren’t in any hurry to push sales with the current market as it is.” He added, “”Frankly our growers are not going to let us run their onions for a zero return, which is smart on their part, because there is no reason to run them if they aren’t making a return.” Dwayne explained that customers aren’t really asking for lower prices, so that really isn’t creating demand either. He said Champion is focusing on its program business and contracts with hopes the market will turn.

Kimi Fitch with Jamieson Produce in Vale, OR, told us Jamieson is nearly complete with harvest but does have few loads yet to come in. She said quality is very good, with Jamieson volume running heavy to yellows with some supplies of reds available. Kimi also reported the open market is currently unsettled and demand has dropped somewhat over last week, but she added, “We are lucky market-wise because we have a lot of contract business and a good customer base.”

Harvest for Murakami Produce is 99.99 percent complete, according to Chris Woo in the Ontario, OR, office. Demand is fairly moderate this week. Chris added, “This week we’re not pressed or scrambling.” He noted demand seems to be even across the board, and there doesn’t seem to be any one size or color that is in more demand than another. Quality is excellent, he said, and the size profile is large on yellows. Though Murakami does have fair supplies of medium yellows, Chris mentioned that sizes on reds and whites are more on the jumbo side than mediums. Regarding the market, Chris said, “Prices are such that we are very busy promoting this high quality crop at these reasonable price levels for holiday ads, encouraging our customers to heavily promote them for the upcoming holiday season.”

SE COLORADO AND KANSAS:
Don Mameda with L&M Cos. in Rocky Ford, CO, reported on Oct. 26 the operation has wrapped up harvest and is working out of storage in both the Arkansas Valley of Colorado and in neighboring Kansas at the Ulysses facility. “We will run Colorado product through mid-January, which is a normal schedule for us,” Don said. “The onion quality is good, and size is a little smaller. Since there is big demand for mediums, this worked out pretty good for us,” he noted. The Colorado crop is whites and yellows, heavy to whites. During the Kansas season crews contended with some rain that affected yields on the later onions, but Don said the predominantly yellow volume, with some reds and whites, is good quality and heavy to jumbos this year. This marked the first year L&M packed out of Kansas, although it has shipped onions from that state for several seasons.

NEW YORK:
Maureen Torrey with Torrey Farms in Elba, NY, reported the farm is wrapping up harvest and getting everything into storage. Maureen also told us demand has been good, but like many Northeast onion shippers Torrey Farms is still receiving pressure from Canadian imports. She said the company is looking forward to increased holiday demand. Torrey Farms offers yellows and reds in sizes pre-pack to jumbos. 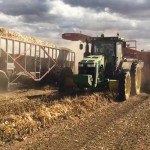