CALIFORNIA:
Rich Hoffman of Bakersfield, CA, told us growers are starting to plant in El Centro. He said weather conditions for planting “couldn’t be better,” and he said some growers have opted to start a little later than normal. Hoffman commented, “The growers in the area are busier than a one-armed paper hanger, working hard to get their planting plans in place.” Growers in the Bakersfield area will start planting later this month.

UTAH:
Don Ed Holmes at The Onion House in Weslaco, TX, said his company’s Utah deal will have all its onions in by next week and will be packing in mid-October.

TEXAS – Rio Grande Valley:
Don Ed Holmes at The Onion House in Weslaco said on Oct. 5 his Texas operation had close to 10 percent of its onions planted, and he expects to be done around Nov. 15. “There’s a 45-day window,” he said, adding that conditions have been good for planting. “We’re going a shade heavier with reds as the red demand continues to grow. We’ll have fewer whites out of Texas and more out of Mexico. Our yellows will be about the same. Everything with us is just rockin’ right now.”

N. COLORADO:
Bob Sakata at Sakata Farms in Brighton, CO, said that weather issues during this year’s onion growing season delayed his operation, but crews are harvesting now, and first loads should be shipping by the end of October. “We had everything planted in March, and then we had heavy rains in April and May, followed by heat in June that slowed the stands. They started to bulb in September, and we are seeing a smaller crop in both volume and size profiles,” he said.

MEXICO:
Don Ed Holmes from The Onion House in Weslaco, TX, told us the Tampico, Mexico, crop now going in the ground is seeing “really good conditions, and we should be done planting in the next two weeks.” First loads of this crop, which is heavy to whites, are expected to ship the last week of January, 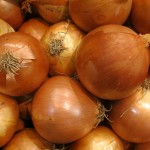