Steve Gill of Gills Onions in Oxnard, CA, said the company is finishing its storage varieties and looking to start the new crop harvest around April 5. “Growing conditions have been excellent this year, and all is looking very good in the Brawley and Bakersfield growing areas,” Steve told OnionBusiness.com

Marvin Davis said the crop that Tex-Mex Sales LLC in Weslaco, TX, has in the ground this season is 20 percent whites and 10 percent reds with the balance in yellows. The company also raises both flat and round sweet onions varieties, and he said the crop is in very good shape at this time. Davis’ field men have reported seeing some crops that have suffered from the remnants of Hurricane Patricia in October, and some stands are not faring as well as others. “Overall Texas acreage could see some decrease at harvest,” he said. “If all goes as expected, we look forward to begin out harvest between March 15 and 17.”

Gary Atkin at Columbia Basin Onion in Hermiston, OR, said planting began the week of Feb. 15, which is normal for the company.  Because they plant in sand, planting this time of year is better for overall onion maturity.  Atkin says Columbia Basin’s program will be the same as it has been for many years – the company didn’t make any changes based on a good market this year.

Herb Haun at Haun Packing in Weiser, ID, said his growing operation will start planting around March 10, which is the traditional start date. Water is more plentiful this year, and there might be some increase in acreage in the Treasure Valley, but Herb said he doesn’t see much change because most growers are set in their rotation for the season.

Ashley Robertson at Fort Boise Produce in Parma, ID, said some of the operation’s growers are getting their earliest onions in the ground starting Feb. 22, weather permitting. “Most will start planting in March,” Ashley said, adding there are no plans for increases in acreage or changing the variety split.

At Murakami Produce in Ontario, OR, Grant Kitamura said the water will be adequate for onions, which could lead to additional acreage planted in the region. “Everyone I’ve talked to says they have adequate water supplies, and snowpack is over 100 percent, so growers can get back into their rotation,” he said. Grant also said there might be more reds in the 2016 crop.

“Normally our growers start planting in mid-March,” he said, adding, “Mother Nature has everything to do with that.”

Ryan Fagerberg at Fagerberg Farms in Eaton, CO, said, “We will be raising a few more colors next year, though total acreage will remain the same.” Ryan added, “Once we are finished in the shed [after shipping ends in early March], it will be only a few short weeks before we start the growing process and look forward to our usual Aug. 1 harvest.”

The New Mexico crop is growing well, with favorable weather conditions so far in 2016, according to James Johnson of Carzalia Valley in Columbus, NM. James told OnionBusiness.com, “The crop is doing really well. We’ve had a great winter and early spring, and we’re still on track to start shipping our overwintered onions on May 20. We just finished our spring seeded planting, and we’re patiently awaiting our transplants’ arrival. They7 should be coming out of the ground in the next two weeks. Mother Nature has been cooperating very well so far.” 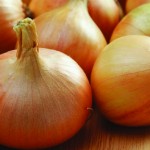