Grant Kitamura of Murakami Produce in Ontario, OR, said all growers are planting, and early onion plants scheduled for August harvest are emerging and have good stands. Most growers will be finished planting within 10 days to two weeks.

Ryan Fagerberg at Fagerberg Farms and Fagerberg Produce reports the blizzard last week in Colorado affected the planting schedule somewhat. “We have a couple hundred acres of seed onions already planted and are now waiting for dryer weather to enable us to plant the remaining crop,” he told OnionBusiness.com on March 29.  “I anticipate that we will resume planting both seeded onions and sets on Monday, April 4.”

John Vlahandreas of Wada Farms is known to many in the onion industry as the “Voice of the Desert,” and he will spend six weeks in the Imperial Valley area when Wada starts shipping onions out of the Brawley/Imperial Valley area beginning April 25. John said that Wada markets onions for Troy Caston Farms out of Brawley. “We have a lot of onions in Imperial Valley and the quality looks excellent,” John said.

At Peri and Sons’ Nevada office, Cindy Elrod said that company’s California program “is doing well,” and she said the early part of the deal out of the Imperial Valley looks good and is on track to start packing the last week of April with yellows. Whites and reds will start up the first week of May, and Cindy said the deal, which is smaller than the Central Valley’s, fills a gap and includes organics. The Central Valley is likely to start the first week of June, with the front end of the deal on time and the middle possibly later due to winter rains that affected planting.

Mike Smythe of Big Country Sales, Inc. said he visited the Imperial Valley earlier in March, and on March 30 he said, “We ill have yellows available the week of April 18,” which is earlier than his previous prediction of April 25-May 1. Mike has told us the crop looks great, and he said, “Sizing will be similar to last season’s, heavy to jumbos and colossals.”

The shape of things to come: OnionBusiness.com expanding to visual content with drone 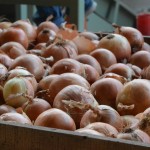