According to Champion’s President John Wong and Vice President Dwayne Fisher, Jensen will manage grower/industry relations, coordinating with the operations grower base while assisting in sales and also working in the packing and food safety departments as well.

OnionBusiness.com caught up with Dallas through the miracle of email, and he filled us in on his extensive ag/farming background.

“I was born in Ellensburg WA, and grew up in Mattawa, WA, where I attended Wahluke High School,” Dallas said. From Wahluke HS, he went on to attend Idaho State University in Pocatello.

“I moved to the Treasure Valley in 2003,” he said, noting his wife, Ann Bingham Jensen, “grew up in Homedale, ID and we really liked this area.”

For the past decade, Dallas was employed by Agri-Lines Irrigation, and he said that complemented his earlier years.

“I’ve been around agriculture my whole life,” he said. With farm experience that covers everything from “apple orchards to alfalfa fields,” Dallas said, “I have learned over the years that the grower is an essential part of any industry. I plan to work with our growers to maximize their efforts along with the operation of the shed to bring a quality product to the end user.  Bridging that gap will be crucial to our success moving forward in an ever-changing industry.”

Also bridging the generational gap, Dallas brings a good measure of tech savvy with him. “Technology is amazing!” he said, adding that he’s seen changes to the farming world just in a few short years.

“Probably the biggest change I’ve seen is the efficiency with which these farms have to operate,” he said. “Everything is bigger, faster and more expensive – from conventional beds to the intense beds and drip irrigation.”

But if the world stays on course, Dallas said, “I think you’ll continue to see more technology driven operations, anything to make it more efficient and maintain quality if not improve it.”

At home, Dallas and Ann are “going on 14 years of marriage,” and he said, “I don’t know how I did it, but I was lucky enough to have four beautiful girls.” His daughters are Elizabeth, 11, Payton, eight, Hannah, four, and toddler Rachel, who’s one year old.

“We love being outside, taking trips to the cabin, hunting, boating, swimming, and Ann loves to cook,” Dallas said. He added the family loves “volleyball and playing any sport.” 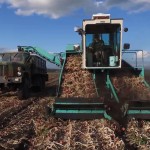