As of Wednesday, Aug. 30, Hurricane Harvey had been pounding the Gulf Coast for six consecutive days, making a second landfall east of the devastated Texas coastal area of Rockport and the nation’s fourth-largest city, Houston.

The death toll from the monster storm has been reported between 18 and 30, with confirmations continuing to come in. Estimates on property destruction are impossible at this early date, although some reports are indicating losses from Harvey might exceed those from Katrina.

On Wednesday Harvey, which had backed out into the Gulf and headed east, hit southwestern Louisiana, where it was expected to weaken into a tropical storm, and Texans were starting to take stock of their situation. Levees had breached in several locations, causing additional evacuations and more flooding.

The devastation after six days of rain and wind in that part of the Lone Star State is almost beyond description, but we do know that Harvey set a new lower-48 state record for rainfall from a tropical system, with reports of just under 52 inches coming from at least one monitoring station.

Freeways remain impassible, with water hitting levels reaching the overhead signs in some areas. Thousands of homes have been ravaged, and tens of thousands of evacuees are finding shelter wherever they can. Rescues are both dramatic and ongoing.

The Cat 4 hurricane first hit the coastal resort/retirement town of Rockport on Aug. 25 with winds topping 130 mph, leveling much of the community. It moved up to metro Houston, an area that covers 10,000 square miles – more land than the state of New Jersey.

Though written descriptions provide some insight, it’s the first-person accounts that drive home the magnitude of Harvey.

Our onion industry friend Jeff Kennell, who is with Alamo City Produce in San Antonio, posted photos he shot of the devastation from in Rockport, and OnionBusiness.com shared those photos on our Facebook page. We also spoke with Jeff this week to gain his perspective.

Jeff and his wife have a vacation home and also house a boat in Rockport, and Jeff traveled with a friend to assess the area shortly after the storm’s eye hit.

“Me and my buddy really just wanted to see if our second homes were intact,” Jeff told us. “When we got there, it was absolutely horrific!”

While Jeff’s home and the structure that housed his boat were largely untouched, his friend wasn’t as lucky.

“My buddy’s home was hit pretty hard. Water had invaded the house, and windows were broken,” Jeff said. “The damage was pretty bad to his house and the whole neighborhood.”

He said the number of downed trees and power lines were “beyond comprehension,” noting, “There were some structures leveled and so bad that you couldn’t even tell what they were before they were hit. But I think the most amazing thing about the whole trip is that when we were leaving the area with rain still pounding down, we saw convoy after convoy of literally hundreds of utility vehicles racing to the scene to help. It gave me chills. It was something I will never forget.”

Jeff said that he and his wife planned to return Rockport on Aug. 31with a chainsaw to assist wherever they are needed.

“It is a tight-knit community there, and even if it’s just helping to clear trees, we really feel like we need to do something,” Jeff said.

When asked how Harvey has impacted the onion industry Jeff said the Houston area was at that time unable to receive loads.

And according to Jeff and news sources, it’s not going to get better any time soon.

“I really feel bad for these customers,” he said. “They really want the product, but it’s just not happening, and it’s hard to tell when it’s going to get any better.”

For more photos and videos from Jeff’s recent travel to Rockport, go to OnionBusiness.com’s Facebook page.

David DeBerry with Southwest Onion Growers in McAllen told us during the afternoon of Aug. 30 that the Houston region had received 27 inches of rain during the past 24 hours. “It’s still going on,” he said. David, who has family and friends in the hard-struck metro area, said he was monitoring the situation closely, and he said, “I talked to some receivers in Houston today, and they were able to get to their offices. They don’t know whether to order half as much or twice as much.”

The human element to the tragedy, he said, is not being fully reported in mainstream media, and he said, “If you pay close attention, you’ll see what this country is all about. Nobody there is thinking about politics.”

Volunteers and first responders have come in from “virtually every one of the lower 48 states. New York City firefighters and police are there to help. Responders from Nebraska are there.”

David also said that the cost of such response cannot and should not be measured in dollars and cents. “Two or three of those volunteers have lost their lives working to save others,” he said.

He concluded, “This is a huge tragedy, but maybe on the backside of this people are seeing other people for what and who they are. There are some really heartwarming stories coming out of Houston.” 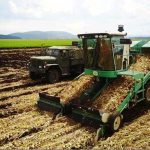 Market and Crop Update for August 31