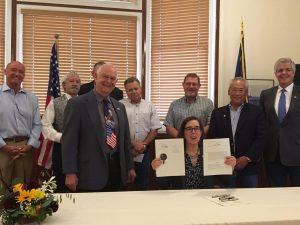 Among those sites was Ontario, OR. The bill is providing $26 million for a major rail transload facility to be built in Malheur County, where Ontario is located. Gov. Brown was in Ontario on Monday, Aug. 29. She then visited Bend, Medford, Eugene and Portland for four additional ceremonies.

In Malheur County, which is part of the region’s famed Treasure Valley onion production area, the transload facility will allow onions as well as other commodities to be loaded directly onto rail cars, reducing transportation costs and possibly opening new markets. Perishable commodities are part of the initial thrust.

Passage of the bill was nearly a decade in the works, with the final push coming in the past year. The Oregon House of Representatives approving the $5.8 billion transportation measure on Wednesday, July 5, and the senate ratifying the bill the following day. Gov. Brown had long supported the bill and pledged her blessing, noting in a July 6 tweet, “Proud and grateful of all those who worked tirelessly on the transportation package. I look forward to signing this critical bill.”

In addition to HB 2017, HB 2012 was also passed, creating an Eastern Oregon Border Economic Development Board, which is considered crucial to expanding the region’s economical development.

Prior to the Aug. 28 signing celebration, appropriately held at the Railroad Station in downtown Ontario, Gov. Brown met with onion industry members and local officials in a closed-door “Meet and Greet,” where stakeholders expressed thanks and appreciation to the governor for assistance that many believe will improve the region’s ability to compete with other agricultural regions.

Several local leaders were on hand to offer remarks about the importance of the project funding. Grant Kitamura of Baker & Murakami Produce Co. located in Ontario, who was elected president of the transload facility’s governing board, said, “During this process, I have come to know the governor as someone who truly cares. When she visited the region after the winter storms, she asked, ‘What can I do to help?’ and I told her that we really needed some engineering assistance to get a handle on all of the structural damage. And, by golly, she did it! We got that assistance.”

Kitamura continued, “And that’s not all. She has come through with this funding for the desperately needed transload facility, and we couldn’t be more thankful.”

Gov. Brown and others acknowledged that funding for the project could never have come to fruition without the constant persistence, dedication and hard work on the part of Oregon Rep. Cliff Bentz.

“You all should be very proud of Rep. Bentz,” the governor said at the ceremony. “I know he worked tirelessly on this bill.”

The hard work has paid off, and with funding in place, the governing board, led by Smith, will be acting quickly to coordinate with Union Pacific officials to secure a site for the facility that will also be the location for a future industrial park.

Smith, who is also an Oregon State Representative, is the executive director of economic development for several southeastern Oregon counties.

Smith told OnionBusiness.com at the signing, “Today is a day of celebration and thanks, but the real work starts tomorrow, and we are all anxious to get this ball rolling.”

“This is a big opportunity,” Bentz commented to OnionBusiness. “It’s a chance for this community and surrounding areas to do better financially, and the potential and growth opportunities are amazing.”

Idaho Lieutenant Gov. Brad Little was among those at the signing and said, “For years the Treasure Valley has struggled with transportation. I can remember 25 years ago when former Gov. Phil Batt was packing and shipping onions, and his biggest frustration was the inability to move onions out of the area quickly and at a reasonable cost. Finally, after all these years, it’s really happening, and Idaho intends to support this effort fully.”

Kitamura said that cooperation is exactly what needs to happen. “We need our friends across that state line to be fully involved,” he said. “Between onions, beef, trout and a variety of other agricultural products, there is a lot of product that can be shipped from Idaho and Eastern Oregon, and we’re going to make that happen.”

More photos from the event: 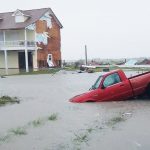