Well-known and respected onion industry member Dorothy Martin Zabka, 91, of Greeley, CO, died Oct. 21 at age 91. She was a resident of Grace Pointe in Greeley.

Services were held at Tuesday, Oct. 27, followed by entombment at Linn Grove Cemetery.

Mrs. Zabka was born Aug. 30, 1924, to Henry G. and Anna C. (Kobobel) Martin in East Greeley and attended Greeley High School, graduating with the class of 1942. She also attended Barnes Business College in Denver, returning home to work in Martin Produce, her family’s business, with her father. She lived in Greeley her entire life.

Dorothy married Duane “Dewey” Zabka on June 1, 1958, and they were married 57 years at the time of her death.

As one of the managing members of Martin Produce, Dorothy was a pioneer in the produce industry for women. She continued to blaze trails as a major force in the potato and onion industry for many years and was a member of United Fresh Fruit and Vegetable Association and the National Onion Assocation.

She and her husband traveled frequently, both for business and pleasure, and they attended business meetings and conventions across the country.

Though she was devoted to running a successful business, Dorothy was also quite active in recreational pursuits such as bowling, tennis, vacationing and dining out with family and friends. She was also a collector of cars, antiques, teddy bears and pens.

As one who loved trains, Dorothy made it a daily ritual to wave as each passing train, and the crews of those trains came to know her and made it a point to stop at the Martin Produce office to visit when possible.

She was also quite active in her community – and, again, a role model for women. She was elected the first and only female mayor of Greeley and served two terms, holding the office from 1965 to 1969. In 1994 Dorothy and Dewey were honored as Grand Marshals of the Greeley Stampede.

Dorothy also championed causes for others, supporting the Northern Colorado Medical Center Foundation, and she served on the Salvation Army Advisory Board. She was an ardent supporter of the Weld County 4-H program and was in fact a 4-H leader for 50-plus years. She founded the Catch-It-Calf program and Weld County Fair Car Show, and she served on the Fair Board and Royalty Committee.

Dorothy was a member of Our Savior’s Lutheran Church. 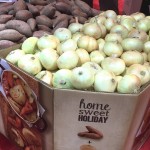