Pearson is Eagle Eye’s onion commodity manager, Poole said, and will handle the company’s grower relations and sales from that centrally located office.

“We opened the office on Aug. 14, and Jason will manage onion sales and expand grower relations on a year-round basis from Nyssa,” Pool said.

Both men spoke with OnionBusiness on Sept. 20, and Poole added, “We handle onions from Mattawa, WA, as well as from the Treasure Valley, and it made sense for us to have an office in the middle of onion country.”

Pearson said for him it’s “coming home again.” He said, “I come from a farming background. My family grew onions in this area.”

The new onion manager earned his Business Degree from the College of Idaho and worked at Eagle Eye’s Layton, UT, facility for 11 years before moving to Seattle, where he was a senior buyer for Unified Grocers. When Unified was purchased by Charlie’s Produce, Pearson continued in his buyer’s role for that operation for another five years.

“I returned to Eagle Eye in early August,” he said. “At Charlie’s I handled all produce items, and now it’s great to be coming home and working in what I grew up with, which is onions.”

He said the strategic location is “good because I am able to get out into the fields, boots on the ground.”

Jason Pearson’s new office is located in the heart of downtown Nyssa, but he said he’s more easily reached by cell at 206-422-6830 or at jasonp@eagleeyeproduce.com. 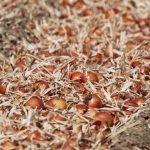 Market and Crop Update for Sept. 21