Fourth generation in one of the Treasure Valley’s most prominent onion-growing/packing families, Emily Watson Libsack started her new job as vice president of marketing at the company founded by her great-grandfather in 1912.

Emily’s first day at J.C. Watson Packing Co. in Parma, ID, was Sept. 24, and she told OnionBusiness on Sept. 25 she’s excited to work with family members and to contribute from a skill set she acquired over the last decade in other ag-related companies.

“It’s very exciting to come to the company,” she said, explaining that new markets are being explored and projects launched this crop season.

“The timing is perfect,” she said.

Emily will work with the sales staff of Kent Sutherland, Jamie Anderson and Sharon Miyakawa in building the marketing program at the Parma facility. Her father, Jon Watson, carries out the responsibilities of company president, and her mother, Margie, is corporate secretary/treasurer. Emily’s brother, Bradley, is vice president of operations, and to further strengthen company ties, Emily’s husband, Colbie Libsack, is farm manager. Their daughter, two-year-old Harper Mae, is one of three fifth-generation members, sharing that honor with her cousins, Jane and Anne, the daughters of Bradley and his wife, Faere.

When asked what her initial priorities will be, Emily said, “We will be looking into new markets and further developing our customer base, and we expect to expand into new outlets in the next 18 months.”

The history of J.C. Watson Packing Co. goes back to the early 1900s, when Iowa pharmacist James Christopher Watson, Emily’s great-grandfather, ventured West at the invitation of a fellow Iowan who’d moved to the Treasure Valley. In 1912 James started the company after he and his wife, Emma, had spent some time touring the West and deciding Parma was much to their liking.

As the company has changed through the generations, it has done so by keeping pace with the best and most current technology of the day. And the Watsons themselves hold to the same course to continually better efficiencies and service. The farm utilizes computerized equipment for planting and input; the shed is state-of-the-art with grading/sorting and packing.

Plans are on the boards now for additional improvements in transportation and also in housing provisions for both seasonal and year-round employees.

And Emily herself, although starting as a teenager by working summers at the office and shed, told OnionBusiness she purposely sought out other produce and ag jobs before bringing that experience to her job at the family company.

“I always wanted to offer value to the company; so I developed skills at other companies,” she said. Her background includes eight years with Nunhems, recently acquired by BASF, where she was a global crop sales manager for carrots and other crops, including onions. That position afforded her experience not only within the United States but also in Canada, Mexico, Central America, Europe and the Asian nations of China and India.

While based at the Nunhems facility near Parma, Emily spent considerable time in California, Mexico and Canada. She also honed tech skills at Unisun Software in Boise, ID. 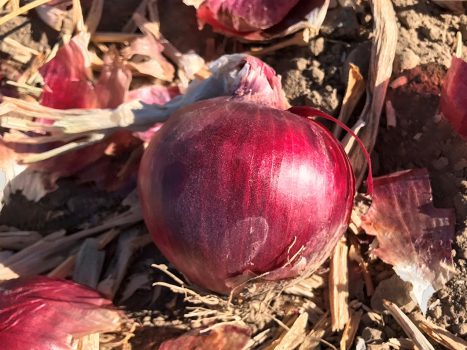