Our Netherlands friends at Eqraft recently shared news of its equipping Go Products, also a Netherlands operation, with the electronic sorter, Eqrader. The result, we’re told, is win/win.

The release told us that Go Products is a family business based in Noordoostpolder, and the company works with multiple onion set growers.

“After years of manual sorting, they were ready to take the next step – an Eqraft electronic sorter,” the release said. It continued, “Project leader, Mike Kooijman, and client, Arjen Goud, discussed this collaboration.”

Because Go Products consists of father, Hans Goud, son, Arjen Goud, “and a handful of permanent employees,” the release noted, “At first glance, a massive investment such as an electronic onion sorter, therefore, did not seem the obvious choice. Yet, more than a year ago, Arjen Goud opted for the Eqrader from Eqraft. Installing this machine was no mean feat. However, the sorting machine is now running at Go Product’s factory in the Dutch town of Nagele in Noordoostpolder.”

Arjen was quoted as saying, “The technology is fantastic. It is unbelievable that a computer can look inside an onion and detect any rot there.”

A bit of Go Products history: “Hans, Arjen’s father, has about 35 years of experience in the area of onions… and started Go Products in Nagele 20 years ago. Arjen grew up among the onions. He learned all about the sector on his father’s knee. However, Arjen first worked for other companies for several years. He then joined his father’s company. Thanks to Arjen, the company now also processes and packages organic consumer onions. This is in addition to the onion sets.”

The release explained that “Go Products is a contracting company. It is, therefore, dependent on other parties. These other businesses make use of Go Product’s sorting and packaging capacity. That means Go Products must be quick and flexible when it comes to responding to their clients’ needs. These are sometimes last-minute.”

Arjen said, “If someone phones in the morning, we should, preferably, get started for them that same day already.” But, the release added, “Finding the right staff is, however, becoming increasingly difficult and expensive.”

Arjen continued, “There are not many people who want to work on an assembly line. Staff turnover is high too. It then costs us a lot of time to keep training new people.” When human error is added to the equation, “employees may not be able to see an onion is rotten on the inside,” the release commented. “This results in inconsistent quality. Changeover times between orders are also often too long. The consumer onions sorting line’s capacity was, therefore, not sufficient. So Arjen went in search of a solution to all these problems.”

Though it’s longstanding relationship with Eqrader, the collaboration “was not a random choice.” The release said, “The Goud gentlemen already have machines that were manufactured by Eqraft. The first machine they bought was an onion topper. This machine is still running well after 20 years. Go Products’ owners are also pleased with the additional equipment they purchased afterwards.

“They build good machines,” Arjen said, adding, “Their service is excellent too. If there is a problem, they are here within 10minutes. That is extremely important for our continuity.”

Arjen is said to have had his eye on the Eqrader “for quite some time.” According to the release, however, “Dad Hans and Rob, an employee, still had to be convinced. They do not believe in new technology until they have seen a trial run with their own eyes. A visit to HOZA factory, where the Eqrader is used, was the deciding factor.”

Arjen said, “It was quiet for a long time on the car ride back. I knew then they were convinced.”

During the period when the contract was established, “Eqraft was going through a turbulent time,” the release said. It explained that the company was changing hands, but the new ownership did not alter Arjen’s choice for the optical sorter. “The bond of trust he had built up with Eqraft played a major role in this,’ the release said.

Arjen added, “My father and I had a good working relationship with Pieter Kaat of Eqraft. He was always extremely open and honest with us. We trusted that they would again deliver a good result in the end. That is how we work. We only want long-term relationships.”

Mike Kooijman, Eqraft’s project leader, expressed his gratitude for the decision, saying, “It meant a lot to us that they signed for this project.” Mike and his colleagues, “have since reached calmer waters again…” and “are currently finishing the new sorting line for Go Products.”

Still, executing the project “was not without its difficulties.” Positioning the sorting line was a challenge because “Go Products’ factory is angular.” Mike said, “That seemed to be a puzzle at first. Fortunately, the machine line seemed to fit perfectly into the building’s angle.”

And while the “takeover of his company also caused some turmoil” and “everything did not always go according to plan,” the new sorting line was up and running at the start of this new year.

“That was thanks to Go Products and Eqraft’s joint efforts,” the release said. Mike said, “Now, the T’s just need to be crossed and the I’s dotted. It remains a learning process for us. The Eqrader is a relatively new machine and each time we learn something new.”

Arjen agreed, saying, “We did experience some difficulty with this machine’s delivery. However, in the end, the people from Eqraft reached a result of which they can be very proud.”

Now, the companies agree, they’re ready for the future, and according to Arjen, the biggest advantage “lies in his company’s newly acquired flexibility.” He said that if a “client phones in the afternoon and says, ‘I want a batch of onions sorted today…’” Go Products switches the machine on. “We can respond much quicker to our clients’ wishes. We are also less dependent on seasonal workers.”

The release said, “The Eqrader also allows for working more sustainably with byproducts. Thanks to the camera and infrared technology, bad onions can easily be removed from a batch. Even inner rot can be detected. These can then be used in, for example, a biodigester. Nothing, therefore, has to be thrown away. Go Products’ people will still need to familiarize themselves with the new factory set-up. However, as far as Arjen is concerned, there is no looking back.”

He said, “Given the chance, I would choose the Eqrader again.” 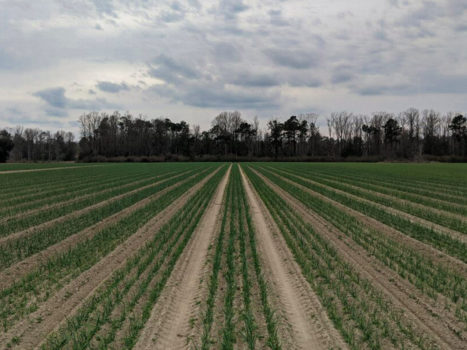