Highs, lows, peaks and valleys – the European onion market has seen it all this year.

Our friend Rutger Keurhorst, Director Commerce with Netherlands-based Eqraft, provided us with the following comprehensive look at the European onion market.

He said of the Netherlands, “After an absurd season with very high prices the season now looks much more stable. Yes, it has been very hot and dry during the growing season but the averages are 59.6 metric tons per hectare compared to 41 last season. So total yield looks like a small 40 percent more, which means a lot to export again in a situation where we lost markets last year because of high pricing and shortage.”

He continued, “Right now the last bit is still in the fields and the rain is keeping us away from bringing them in. There is a week or two of work still left. The first eight weeks of the season have been good, but a little less than average, with Brazil as one of the main importers of our crop. We have had some people from Brazil over, and they were suffering extreme weather, which gives local market shortage. So basically Brazil saved the start of our export market.”

Rutger said, “Nowadays the far East and Africa are also on the market, which creates a steady flow. Quality looks fine so far, but no one knows how bad the internal damage from the extremes in growth season really is. Time will tell.” And, he said there’s is a “big demand from Eastern Europe, [where it] seems they have a significantly lower yield than last year.” He concluded on the Netherlands: “As long as the price stays in a reasonable area (current between 17-19 ct/Kg packed product). the Dutch hope to recapture a bit of the export market that was lost last year. There are a lot of onions to sell. The impression is that most of the people can make a margin, and everyone hopes for continuity and stability.”

Looking at Belgium, he said that the country’s onion industry has a “slow market with low prices.” He added, “A lot of irrigation has been done (overhead), and combined with the drought [there is] a high risk on diseases as fusarium. People hope the market will recover a bit when all onions are under roof.”

In France, he said, there is a “reasonable harvest, and prices are good. They were a little ahead in Europe and are relying on other European countries. So they expect prices will drop a bit in the upcoming weeks.”

Germany “was completely empty at the end of 2018 season and had a run on import. A lot of onions from Italy have found their way to Germany. As we speak, their harvest is almost done, and import onions are gone. It looks like a flat season without any high or low prices.

Spain, Rutger said, has had “a lot of rain and hail in the onion harvest which has caused a delay and losses. Prices dropped around July since all surrounding European countries have enough onions. Prices are still low, and the Spanish are hoping for a recovery when all harvest in Europe is done.” 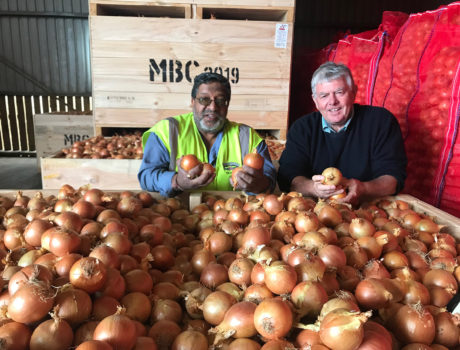 Good returns in ’19 equal increased acreage in New Zealand for ’20?