Portland-based Stuart Follen, head of SL Follen Co. and one of the industry’s experts in worldwide produce exports, provided OnionBusiness.com with a terrific overview of current global conditions, weighing in with updates on Oct. 30.

The news starts off citing the negative effect of a strengthening dollar, but Stu ends on a high note.

Beginning with SE Asia, Stu said, “Chinese onion quality has improved recently, and China prices have fallen somewhat in SE Asia. Chinese onion storages are not known to be great, so my opinion is that they are pushing onions while the quality is still good and demand is strong.” He added, “I still expect the Chinese onion supply to decrease a lot over the next few months and believe there will be a good market for medium and perhaps small jumbo yellow onion. The U.S.A sales ‘window’ will most likely be for onion arrivals January and February. This means we would start shipments in early December. After this, New Zealand will become the main supplier.”

Last week Stu commented on SE Asia, saying that “over the last 10 years Holland has dominated this area due to cheap ocean freight and cheap, subsidized onions. Now, SE Asia is also buying from China.”

Stu also updated his European report on Oct. 30, noting, “The U.S. dollar has been strengthening lately, which has a negative effect on our competitiveness. Spain also seems aware that some of the European buyers are starting to look at U.S.A supplies for the larger sizes. As a result Spain last week decreased prices to mainland Europe and the U.K. Lower Spanish offerings plus a stronger U.S. dollar is causing European interest to wane a little bit.”

Continuing, he said, “However, as the season continues, prices and currency values will keep moving around. There is still ‘good’ potential if we can supply at a workable price and acceptable quality. In the end, it’s always about price in Europe.”

He had noted the previous week that Europe’s main producing regions are Holland, Germany, U.K. and Poland for medium, small jumbo and pre-pack sizes. “Jumbo, colossal and super colossal onions are produced primarily in Spain,” he said. “Much of continental onion production is non irrigated, which can leave it vulnerable to weather anomalies such as draught. Spain is similar to Idaho and irrigates most if not all of their onion acreage.”

Also earlier in the month, Stu said while Japan is a “traditional market for U.S. onions, the volume today and over the past 10 years is only a fraction of what it once was for U.S. onions.” He added that China “dominates the Japan processor onion trade now,” saying China ships “20kg cartons of pre-peeled onions at normally about the same price as our bagged, non-peeled onions.” Stu said that quality from China for peeled product is normally good, adding, “Shelf life is short, but transit time from China to Japan is only three to five days. So, Japanese processors can order or cancel on short notice.”

The result, he said, is that it makes competing difficult.

The main onions exported are small jumbo yellow and red onions, and most reds are contracted seasonally.

Commenting on Taiwan, Stu said that is a “stagnant market that normally imports from August and September through December. By January, they are normally having new crop from the south of Taiwan.” He called volumes “pretty consistent, with the country of Taiwan buying 30 to 40 containers weekly.”

He added, “However, over the past few years Korea and Japan both have sold their onions to Taiwan, which has decreased U.S. sales. Taiwan buys small jumbos and regular jumbos.”

Looking at the 2018-19 crops worldwide, Stu said in Japan it was “fairly normal in size, but farmers had a difficult growing year.” At the outset “it was wet during planting, and planting was delayed. Then, the rain quit for almost two months; the crop was seriously struggling, and the size of the onions was reduced.”

As the season progressed into mid-August, it started raining again and didn’t stop for nearly three weeks. “The rains were substantial, and many of the onions were said to be damaged. Finally, the weather became more normal, and probably 50 percent of the crop was normal. The issue now is whether the onions will store,” he said. “They may or may not. I am hearing conflicting reports about this.”

Stu said Hokuren, the Japanese agency responsible for Hokkaido onions, “is not reporting anything these days. So, the main dealers in Japan are not sure what the situation is or what it is going to be.” He said common sense would tend to indicate “longer term storage issues will occur in the future,” but he added, “It seems unlikely that this will benefit the U.S.A. Problems probably will not be significant until New Zealand starts shipping in January and February.”

Stu also looked at the prospects for this shipping season. “Volumes to Japan are slow but steady. We are selling a few loads each week, mostly to Southern Japan but some also to Central Japan where transport costs from Hokkaido are more expensive. The overall outlook for U.S. sales increase, Stu said, is poor.

The outlook for Taiwan sales is also poor, he said. “Taiwan is not buying from Japan and Korea so far this year. But, due to the weak onion prices, sales are a race to the bottom. One exporter in Washington has been dumping onions at very cheap prices making it difficult for other U.S. shippers.” Stu said, “We are getting our share of the Taiwan market, but it is a flat market, and we will finish shipping in December.”

There’s a much better outlook for SE Asian, he said. “This has been a bright spot if you have medium yellow onions. Good demand – in fact, we cannot get enough medium yellows and sell out every medium we have quickly.” Stu continued, “Due to the European drought, Holland has not been able to provide two-and-a-half to three-inch onions to SE Asia in any volume. Chinese onions have been plentiful and cheaper than the U.S.A. However, their quality of with-skin onions is not that good. Chinese onions will fade soon, and demand for medium yellow onions will increase each week.”

The primary problem, he said, “will be finding medium supply,” and the outlook for U.S. sales increase is big, “if we can find the onions.”

Europe is another potential bright spot for U.S. onions because of decreased production on the continent. “Production in Holland, Germany, Poland and U.K. is down 30-40 percent, depending on the region. The worst draught in years has caused a huge reduction in onion tonnage. Spain crop is said to be normal, but due to the reduction in Holland, Germany, Poland U.K. areas, their sales in Europe are ahead of last season,” Stu said.

“We are getting contacted each week by European companies looking at potentially importing onions from the U.S. Most think demand and price will come together in December as prices in Europe are rising each week now,” he said. “We have started sending trial containers of mixed loads – medium yellow, large medium yellow, medium red onions, jumbo yellow onions and small yellow jumbo onions to customers in Europe so they can see the U.S. quality this year. We are trying to get sample loads into the market so if the market hits; the Euro buyers know what we have and will have the confidence to place orders.”

And now, Stu said, “We are trying to convince the buyer to focus on small jumbo and regular jumbo yellows. We are also pushing colossal and super colossal for processing.”

Considering freight rates, he said, “Frankly, I am not sure what is going to happen yet. Freight rates to Europe are ok. From Washington, it costs about $5/bag to Europe. From Idaho-Oregon it is about $6 per bag.” But, he added, “Really it depends, like always, on the price. Washington has the advantage. But, normally they want at least a $1/bag premium over domestic to take the risk of shipping.”

And Stu said, “I don’t blame them, but this year may not be the year to do this. We are only going to get one chance at Europe: December/January/February shipments. Then it will be over.
We will need to be aggressive to get any volume.”

What’s Stu Follen’s outlook for U.S. sales increases to Europe? “Very good, if we get a few good breaks.”

And in conclusion, he said, “Ironically, the size we can easily move is the medium yellow. We are actively trying to push Europe to at least small jumbo, and if the price spreads remain, then maybe they will agree.” Either way, he said, “They will not get the volume of medium or large medium yellow that I believe they will demand. So, hopefully, they will be able to accept the small jumbo at least. The wildcard in Europe is Spain. I do not know their inventory. I am trying to find out. If they run out early, large jumbo, colossal and super colossal could be in play.”

The key question, he said, is “How long can we ship and have good arrivals with this year’s U.S.A crop?” The answer: “The ‘good market’ maybe February through April for the large sizes.” 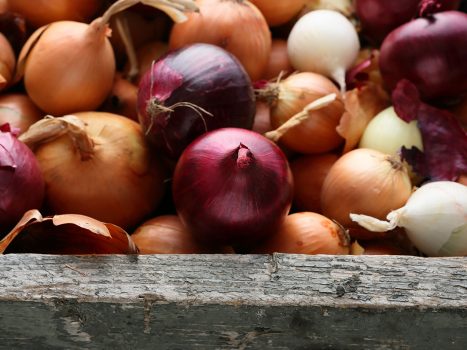