Our friend Theresa Yoshioka, international trade manager with the Oregon Department of Agriculture/Agriculture Development and Marketing, recently attended the enormous FOODEX show in Makuhari Messe, Japan, where super colossal onions from Oregon were met with surprise at their size and very favorable response by chefs who prepared them and show-goers who sampled them.

Held March 8-1, FOODEX brought approximately 75,000 trade professionals and another 78,000 visitors to the 41st annual event, billed as the largest food and beverage show in Asian. Inside were 3,000 exhibits from 79 nations, and Oregon onions were used in cooking demos put on by top Japanese chefs. Exposure was enormous, and reception was great, Theresa reported.

“The tasting was part of the global Brand USA project to promote tourism and foods of different regions of the USA,” she said. “For FOODEX, the largest food and beverage show in Japan and the region, the project manager from the U.S. Agricultural Trade Office in Tokyo arranged tastings from across the USA, and the four regions featured were New York, New Orleans, California and Oregon.” She said the Oregon super colossal onions “ended up in the dishes for two of the four regions of the United States. 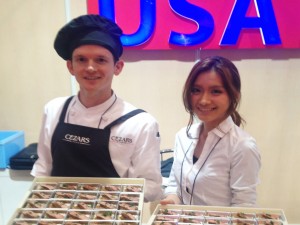 “The super colossal onions were used in kasu-zuke beef dish that represented New York. It is sort of a New York steak with a Japanese twist. The slices of steak were served on an onion jam. The chef that created the dish was delighted with how the onion’s natural sweetness came out,” she said.

Theresa said the New York tasting was done over two days, and “during this tasting our super colossal onions were set out on the counter with all of the New York travel brochures. Those giant onions have amazing stopping power. People walking by can’t help but stop and touch the onions to see if they are real. They pick them up and photograph them.” 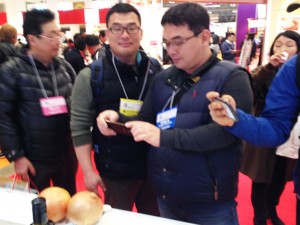 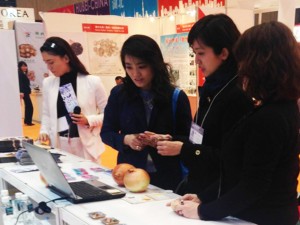 Theresa acknowledged that the onions in the photos were losing their skins as a result of being handled so much, and the appearance might not “meet approval of onion farmers,” but she added, “The farmers may approve of the leads that I have picked up. My favorite quote was from a Costco produce buyer who said that they were ‘Costco size’ as he left his business card with me for follow up.”

Another dish, this one representing New Orleans, was a gumbo that featured the super colossals. That tasting was held over portions of two days also.

Tweeting it up for onions on St. Patrick’s Day 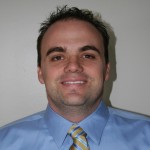