Shawn Hartley, vice president and sales agent at Utah Onions in Syracuse, UT, is the current president of the National Onion Association, and he told OnionBusiness.com he appreciates the benefits that come from being a part of the NOA.

Founded in 1913, the NOA is comprised of more than 500 members throughout the United States and in other countries as well. It is the official organization that represents growers, shippers, brokers and commercial onion industry representatives.

Members get together at a variety of functions. In addition to a summer convention, this year to be held in Niagara Falls July 13-16, the NOA also holds an annual convention, which will be held in Savannah, GA, Nov. 30-Dec. 3. International tours are offered, and this year’s tour in January took in Peru and Panama.

Utah Onions has been an NOA member since 2005, and during his time with the association, Shawn has served on the membership and promotions committees.

The membership committee, of course, works to increase membership of the organization, and the promotions committee works to improve demand within the onion category.

Now as president he sits on the executive committee and attends all NOA meetings. He said he also communicates frequently with members and staff via email.

A strong proponent of the association, Shawn said the benefits of membership are numerous, but he picked out one as the most significant.

“One of the biggest benefits of the NOA is how they take current issues that the onion industry is facing and really tackle them head-on for the benefit of the entire industry,” he said.

He also credited the NOA for its “proactive approach” to the Food Safety and Modernization Act.

“The biggest accomplishment of the NOA [during his time as president] been that proactive approach on FSMA,” he said.

“The association was extremely proactive in engaging with the FDA. There were a few members, along with Wayne, who really were instrumental in making it happen,” Shawn said of certain rulings that pertain to onions specifically. One major ruling had to do with irrigation, and the upshot was that research and lobbying efforts of growers and congressional representatives convinced the FDA to allow irrigation water that exceeds the standard that applies to other produce items if there is an appropriate time between final irrigation and harvest. That provides a die-off period for any E. coli from the irrigation.

Shawn said as for changes in the association, he would “really like to see more grower/shippers be associated, and of course I would really like more participation at the meetings in July and December.” 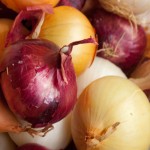