For onions, it’s been a busy summer

In unprecedented times, everyone has had to adapt to a new normal.

For the National Onion Association, that meant holding our first virtual meeting in place of our normal summer convention and annual summer auction. We did this while simultaneously moving from our leased space, waiting for a remodel of our new “office,” and dealing with some tough political issues that affect onion growers nationwide.

In May, the NOA closed on a building in Eaton, CO, to become property owners for the first time in the organization’s history. The move will allow the organization to build a little equity while saving money on steep and ever-increasing monthly rents.

Throughout the summer, NOA Executive Vice President Greg Yielding has been overseeing the remodel of the 101-year-old building, which will eventually house three offices a kitchen and some storage areas for the NOA’s Main Office. As a part of this remodel, we also have come up with a for NOA members to get involved. Members can become a part of this history by purchasing a New Foundation’s brick to line the walk leading up to the front door.

Bricks are selling for $200 to $400 depending on size. Participants can put any message they want in the bricks, even their logos. We’ve had strong participation in this campaign, but we can still accommodate more. Call Sharla Johnston at (970) 353-5895 to order your brick. This is for members only, however.

After canceling our summer meeting planned for Nashville, we decided to hold a virtual event to discuss and communicate some pressing issues in the onion world. First, the situation involving Canadian onions crossing U.S. borders without inspection and subsequently being sold for less than domestic onions came to a head after NOA officials and members brought the issue to light.

Today, all Canadian onions are being inspected at the border, ensuring a level playing field for all. We also got an update on the national Stop the Rot project led by Dr. Lindsey du Toit at the University of Washington and Bhabesh Dutta of the University of Georgia. They are making good progress in this first of a four-year grant on understanding bacterial rot in onions.

Discussions at the meeting also included a presentation from Dr. Jennifer McIntire, vice president of food safety and technology with United Fresh Produce Association, explaining how the FDA handles food recalls after a nationwide recall on red onions from Thomson International in Bakersfield, Calif.

The FDA has still not issued a determination as to what caused the link of salmonella to red onions. Its last report, Aug 18, stated that they are collecting and analyzing product, water, and environmental samples.

The next day, the summer auction wrapped up online with Booker Auction. We had some generous donations this year which helped the auction be a success. Those donations included  a 2020 Top Air RL4400 Lifter donated by Top Air and purchased by Ron Gibson of Bennett Farms Legacy in Utah. Torrey Farms in New York offered up a day fishing charter for six and a vacation house for a week, on which Rod Gumz, owner of Gumz Farms in Wisconsin was the successful bidder; and Fox Packaging in Texas donated a great South Texas Day Hunt, purchased by Tim Hanline of Onion Boy in Ohio. Enza Zaden sponsored $2,000 worth of art for the auction as well.

Overall, 23 winning bidders paid $28,497 for several donated items to make the auction one of the highest-grossing auctions in the last few years (last year, we hit a record of $30,110 after expenses).

While we believe the virtual meeting and auction were successful, it’s just plain hard to sacrifice the real thing. The connections our members make at our conventions are considered priceless to those who attend. And we plan to get back to that ASAP.

As of now, we are planning our Annual Winter Convention for December (location TBA). Our plan for the time being is to move our previously planned Nashville and Bermuda conventions to 2021, barring other unforeseen circumstances. 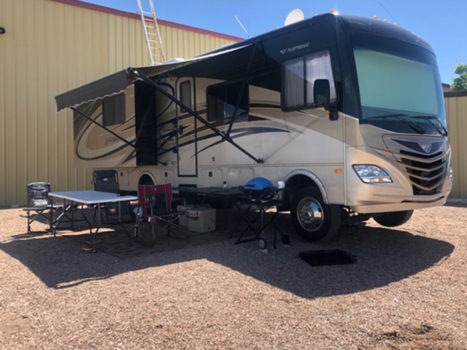