With May 30 the compliance date for some food importers, the FDA’s Foreign Supplier Verification Program will also impact domestic suppliers – onion suppliers included – who go head to head with imported products.

According to Bill Trask, secretary/controller at Baker Packing in Ontario, OR, “Domestic suppliers have to compete with imported products, and this should be an equalizer. The FDA is tasked with not placing undue burdens on domestic producers… but they continue to struggle with this issue.” Trask said newly named Secretary of Agriculture Sonny Perdue is “big on food safety, and it would be interesting to get his view on this entire mess.”

She said importers “may have several compliance dates that you’ll need to keep track of. This is because your compliance date will depend on your foreign suppliers (based on which rule they need to comply with, and their business size). Refer to this link for more information: https://www.fda.gov/Food/GuidanceRegulation/FSMA/ucm503822.htm.”

She also noted that importers of produce not subject to the produce safety rule, items such as potatoes and asparagus, are not exempt from the PSR, saying, “Just because your foreign supplier is exempt from the PSR, it doesn’t mean that you are exempt from FSVP. In fact, because they fall under the ‘foreign supplier not subject to Preventive Controls or Produce Safety Rules’ you, as the FSVP importer, need to be in compliance with FSVP May 30, 2017.”

McEntire said the foreign supplier is defined as “the establishment that manufactures/processes the food, raises the animal, or grows the food that is exported to the United States without further manufacturing/processing by another establishment, except for further manufacturing/processing that consists solely of the addition of labeling or any similar activity of a de minimis nature,” and she said based on conversations with the FDA, that means the foreign supplier of an RAC would “generally be the farm.”

Further addressing the issue of compliance, she said not all the wrinkles have been worked out of the regulation insofar as it pertains to smaller foreign farms and facilities that require extra time.

An FSPCA FSVP training course is set for May 17-18 in the Bronx, NY, at Baldor, followed by a course set May 30-31 in Minneapolis, MN, at General Mills HQ. Another session will be held at FreshTEC in Chicago June 13-15, where a panel will discuss managing implementation of the rule.

You can also find more information on the FSVP posted by the FDA at
https://www.fda.gov/Food/GuidanceRegulation/FSMA/ucm503822.htm. Several dates that are put into play with this regulation are explained. 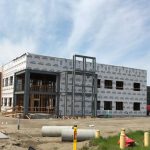 Volm distribution center in Pasco expected to be completed this spring