Washington produce icon Gale Easterday, 79, died Dec. 10 in a head-on collision with a semi on I-182 in Pasco, WA.

Reports indicated that Easterday had entered the freeway on an exit ramp at 3:30 p.m. and was driving west in the eastbound lanes when he hit the semi that was hauling potatoes for Easterday Farms.

According to reports, semi driver Benjamin T. Garfias of Kennewick, swerved, hit a second pickup and then veered across the median into the westbound lanes.

The interstate was subsequently blocked, with traffic rerouted through Pasco for approximately five hours as law enforcement investigated the incident.

Established nearly 70 years ago by Gale Easterday’s father, Ervin, Easterday Farms today has more than 18,000 acres planted in potatoes, onions, corn and wheat. Gale and his wife Karen and five children worked together on the farming and cattle operations in Eastern Washington for more than 40 years, and Easterday remained active “all aspects of the farms, ranches and packing houses,” the company’s website, www.easterdayfarms.com,

The family announced Gale’s death with the following tribute on the website:

“It is with great sadness that we announce the passing of family patriarch Gale Easterday, who died in a tragic accident on December 10 at the age of 79. Gale was a husband, father, brother, grandfather, uncle, and friend who will be missed by so many. He was the heart of Easterday Farms, known for his signature cowboy hat and his love for big farm equipment. We will forever remember his keen sense of humor and his generous spirit.

“We appreciate your prayers and condolences and know so many in our community and industry are impacted by Gale’s passing. Plans for a tribute and a celebration of his life will be shared later. Thank you, the Easterday Family.”

The history of Easterday Farms is chronicled on the site, which says the

“family’s roots run deep in agriculture and the Washington State onion and potato industry. In 1958, Ervin Easterday moved his family and farming operation from Nampa, Idaho, to southeastern Washington, where he purchased 300 acres of undeveloped land in the new Columbia Basin Reclamation Irrigation project.”

It continues, “As a young man, Ervin’s son, Gale Easterday, said he worked what seemed like endless hours on a Caterpillar leveling and clearing this new ground so water had access to run down the furrows.

“The allure of ‘fresh dirt’ was powerful and it compensated for the hard work and resilience necessary to make a successful farm. The tenacity of the Easterday women involved in the development of the farm is what really made it all work. Prior to the introduction of pivot irrigation or also referred to as ‘circles,’ the early years were hard on those trying to keep tidy houses and clean kitchens and make this new area their home. The responsibilities of our grandmother, aunts and mother went beyond the house as they were the tractor and truck drivers, cattle-herders and water-changers when a spare hand was needed.

“By 1979, Gale and Karen were the sole owners of Easterday Farms, with their five children helping work on the farm. In 1989, their son, Cody, became a partner and Easterday Farms was once again a father-son enterprise. Easterday Farms has now grown to more than 18,000 acres of potatoes, onions, corn and wheat. The grain products are used to feed cattle in the Easterday Ranches feedlots. The farm and feedlots are under the direction of Cody, while his brother, Cully Easterday, is the farm Agronomist. The fresh onions and potatoes are packed by Easterday Farms Produce Company, and sold to customers on both the domestic and international markets. The packing houses are managed and operated by Jody Easterday and her husband, Andrew Wills. Gale continues to be very involved in all aspects of the farms, ranches and packing houses, and remains our resident expert when it comes to anything involving ‘iron’ – farm equipment in
layman’s terms.

“We have also partnered with our cousins – the Weyns family of Royal City, Washington. They grow all of the red and white onions and red and yellow potatoes. Ko and Kees Weyns carry on the tradition of Ervin Easterday with their passion for farming.” 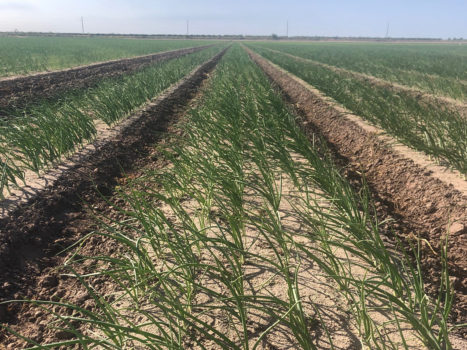