Georgia Commissioner of Agriculture Gary Black made it official on March 18 when he, along with the Vidalia Onion Committee, announced this year’s Vidalia Onion season will kick off with a pack date start of 8 a.m. Monday, April 22.

In a prepared statement, Commissioner Black said, “With tremendous consideration after consultation with the Vidalia Advisory Panel, industry experts from the University of Georgia and crop assessments from the Georgia Federal State Inspection Service, I am pleased to announce April 22 as this year’s pack date for the official state vegetable of Georgia, the Vidalia onion.” He continued, “For more than two decades, Georgia’s Vidalia onion trademark has garnered global recognition, reaffirming our trust in the Vidalia onions being among the highest-quality in the food industry.”

Considered a “rite of spring,” the annual pack date launches the Vidalia window and the onion known for its sweet and mild flavor. The onions are hand-cultivated in 20 southeastern Georgia counties by 80 registered growers.

The pack date can vary year to year, with the Vidalia Onion Advisory Panel, state agricultural scientists and the Department of Agriculture determining the season’s onset based on soil and weather conditions in South Georgia during the growing season. That determination helps “ensure only the highest-quality onions are shipped to stores across the country,” a VOC release noted.  In 2018, 9,356.26 acres of Vidalia onions were hand-planted to be harvested in the forthcoming weeks, according to Troy Bland, chairman of the Vidalia Onion Committee.”

Many thanks to Cliff Riner with G&R Farms in Glennville for providing us with recent Vidalia crop photos shown below and as our featured image. 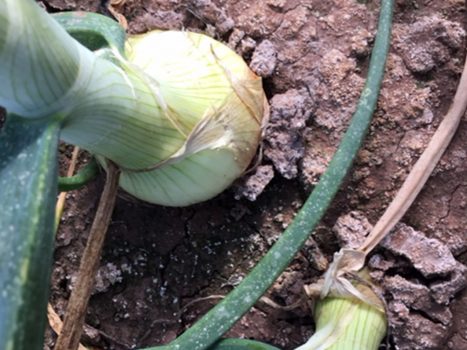