With the question of an H-2A labor issue apparently resolved as of April 8, Vidalia grower/shipper Walt Dasher of G&R Farms in Glennville, GA, is prepped for the season’s official start on April 16.

Walt told us, “We’re ready!” He added, “We’ve been on pins and needs about H-2A, but we’re confident now we’ll get the workers we need. And that’s a huge blessing.” Noting the effects of COVID-19, Walt said Georgia has been hard-hit.

“Everything pertaining to the way we conduct business, including housing, transportation and banking, is changing,” he said.

Walt continued, “This year’s crop looks very good on the front end. Our fresh market crop has nice size and good quality.” He went on to say that the region has experienced unusually warm weather over the last month, and the storage crop could see some issues in sizing.

The fresh market onions will ship through mid-May, and G&R will transition into its storage crop in late May, “which is about two weeks early,” Walt said.

Because of weather this season, Walt said, “I feel like the storage could be short. I don’t think we’ll see the volume we’ve had in the past.”

As the start date draws closer, Crop Production Manager Cliff Riner is busy “deciding which fields to harvest,” Walt said. “He’s been a big asset to us,” Walt added.

With 99 percent of his onions going to retail, Walt said he’s working with his established customer base coast to coast. And, he said, the Growing America’s Farmers program with the Future Farmers of America will continue despite the COVID-19 disruption to school years across the nation.

The program was started in 2015 by Dasher and family members, and through a partnership G&R has with multiple retailers, a portion of every sale of G&R Vidalia Onions is donated toward FFA scholarships across the U.S.

“We’ll work with the participating companies in May and June,” Walt said of the promotion.

Logistics Perspective: ‘The harvest is plentiful, but the laborers are few” 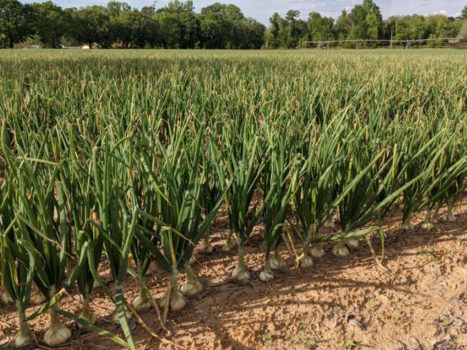