More than 100 years have passed since Frederick Gumz left his native Germany and set foot on American soil – which he soon tilled after establishing himself in a small Indiana community.

And since that time the Gumz name has been synonymous with Midwestern agriculture, with crop farming in Frederick’s adopted home state of Indiana as well as neighboring Wisconsin.

Frederick’s son, Richard, started raising mint in North Judson, IN, in the 1930s. In the 1940s Richard added potatoes to his Indiana crops, and he expanded the farm into Wisconsin.

Richard also passed the torch to his son, Jerome. Today Jerome’s sons, Richard and Rod, own the Endeavor, WI, operation and are the fourth generation of the Frederick Gumz family soil tillers in America; in Kentucky, their brother Kevin owns a champion quarter horse facility also called Gumz Farms.

Recently Rod, along with Gumz Farms onion sales manager Doug Bulgrin, spoke with OnionBusiness.com and shared a bit of family history and the story of the Wisconsin farm and its dedication to responsible stewardship of the land.

Initially the Wisconsin and Indiana farms were a single operation, and in 1994 Rod and Richard purchased the Wisconsin share to make it a separate entity. They called it Gumz Muck Farms but eventually shortened it to just Gumz Farms. In 1997 the brothers bought another working Wisconsin farm, adding significantly to their acreage.

Doug, with a strong background in onions, came to Gumz Farms in 1997, starting in the farming side and moving to sales in 2012.

Prior to joining Gumz, he worked for another local farmer in both the farming and shed.

“Over the years we’ve grown quite a bit,” Rod said of both farm size and personnel. “We’ve acquired either bare ground or functioning farms, and today we have a total of 6,500 tillable acres.”

Of that total, 650 acres are planted in onions, he said. Thirty acres are in reds, with the balance in yellows. The company sources whites for customers who request them.

“The state of Wisconsin has about 1,700 acres of onions, so we are one of the larger producers,” Rod continued.

The onion planting begins during the second week of April, and harvest traditionally starts in mid-August. Rod and Doug said Gumz Farms has grown onions from seed, but this year they’re looking to try transplants.

“We try to ship our own product through the second week of May,” Rod said, adding that Gumz sources from other growers to extend its season for year-round supplies.

Doug and Rod explained the primary customer base is domestic retail, and most of the farm’s onions go to buyers in the Midwest and Southeast.

“We strive to have partnership with retail, which allows for steady movement,” Doug said.

“We’re very fortunate we have a lot of good people who work for us and who we work with,” Rod said. “We wouldn’t be where we are without our employees, industry marketers and suppliers.”
In 2012 the packing shed was updated with new equipment, which added to capacity and efficiency. Rod said some storage facilities have been upgraded with temperature and humidity controls. Also, the farm uses satellite navigation for planting and also center pivot control, Rod said.

“Part of our five-year plan is to have optical sorting,” he said.

Packaging options for retail include 1-, 2- and 3-pound bags, and the line can sticker individual onions. Gumz also does custom packing for private labels, Doug said.

The company’s website, www.gumzfarmswi.com, states, “We are proud to be able to promote that Healthy Grown® is a standard, a brand that was created to convey to the market that Wisconsin Farmers are good stewards of the land and are conscientious and progressive.”

Rod reiterated what the website notes, that the program advocates a proactive stance in agriculture and looks at “a whole farm approach to sustainability, awareness of production practices and conservation initiatives.”

Will a fifth generation take the reins of Gumz Farms in the future? Rod said his three children, two boys and a girl, have not decided if they’ll pursue farming. Richard has one daughter, and Rod said she hasn’t decided either.

But the brothers are hopeful farming will remain part of Americana. “We’re optimistic as to what the future holds,” Rod said. “We’re open to change and to new ideas, and we’ll see where the opportunities lie. We’re very much still in the expansion mode.”

* Gumz Farms has been recognized as a proud partner of  Feeding America. 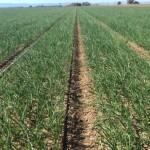 Market and Crop Update for February 2