More snow in the forecast

The governor’s state of emergency declaration on Jan. 25 was issued for Payette County, which has suffered significant losses from record snows and ice in January. The first declaration was made for Washington County on Jan. 22.

Both counties lie in the hard-hit Treasure Valley, where the region’s onion industry has suffered both structure and product losses. Gov. Otter’s state of emergency declarations, as well as those issued by Oregon Gov. Kate Brown, outline the ongoing risk created by the snow, endangering lives, property and community infrastructures. Resources from both states are now available for local agencies that must deal with the situation. Weiser in Idaho’s Washington County will see $65,000 for snow removal, according to Gov. Otter’s statement.

On Jan. 11 Gov. Brown issued a declaration of emergency for her state, which has also suffered enormous losses from the storms. Following her measure, Senators Ron Wyden and Jeff Merkely put forth a request on Jan. 26 for federal disaster aid to cover Malheur County and other Eastern Oregon counties. It was reported on Jan. 27 that President Donald Trump declared major disasters in Western Oregon, specifically Josephine and Lane counties, at the behest of Gov. Brown. Those two areas suffered flood damage from December storms.

Anecdotal accounts of dollar losses from the January “Snowmageddon” in the Treasure Valley continue to come in, with estimates ranging from $25 million to $100 million. While insurance adjusters are investigating, many of the growers and shippers affected have not been able to determine the full extent of damage.

John Wong, president of Champion Produce Sales in Parma, ID, told OnionBusiness.com on Jan. 26 that his operation suffered some structural damage and that more could become apparent as the snow melts. To date cold temperatures have resulted in a slower pace for snowmelt.

On Feb. 1 Herb Haun with Haun Packing reported that the ongoing storm cleanup is starting to make a real difference in his community. “The emergency declaration that was signed by Gov. Otter was a real blessing for us,” he said. “Before the extra funds were provided, every truck coming in for the last two weeks was getting struck, and our own trucks suffered extreme difficulty just trying to get onions to the shed. The extra funds Gov. Otter allocated really helped get the snow cleaned up.”

Herb added, “The roads aren’t great, but they are definitely better.”

In Ontario, OR, Chris Woo with Murakami Produce Co. LLC also said on Feb. 1 there are a large number of insurance claims being filed in the aftermath of the storms in early January. “Buildings are being demolished, and everyone is just doing the best they can to find ways to pack onions and streamline production while dealing with the massive cleanup,” he said.

Just south of Ontario proper at Frahm-Fresh Produce, Trevor said immediately after the storm collapses at his operation the company took efforts to reinitiate packing. “We had to rewire the shed and create a temporary wall with additional heaters, but we did it quickly so we could get going again,” Trevor said.

He said his efforts are on production and shipping rather than cleanup. “We are waiting on insurance adjustors. We really can’t focus on cleanup right now, so we are going full speed on shipping.”

In the meantime, more building collapses have been reported in the region. As of Jan. 26 the number was 176; on Jan. 31 it had reached 196. Onion sheds and packing facilities have accounted for dozens of casualties, as well as scores of other commercial structures and some residences.

Storm recovery/rebuild forum set for Feb. 2 in Ontario, OR 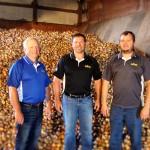