It always pleases us to share good news, particularly when it concerns young people choosing a career in agriculture.

And this week we’re happy to report the Idaho-Oregon Fruit & Vegetable Association’s Scholarship Committee recently announced its 2019-2020 scholarship recipients, all of whom are pursuing some facet of agriculture was they continue their education.

Scholarship Committee Chair Tiffany Cruickshank provided the information, and said, “We wish all recipients the best of luck with their future endeavors and congratulate them on their successes!”

Recipient Elisabeth (Lily) Bybee received a $700 scholarship. Lily is the daughter of Marc and Tamara Bybee and granddaughter of Garry and Ronda Bybee of Fiesta Farms, Inc. She is a 2019 4.0 G.P.A. graduate of Nyssa High School in Nyssa, OR, and will be attending Gonzaga University to study Education in the fall. Lily intends to pursue a career in elementary education, inspired by the positive influences she has had in her life. In addition to the I-O F&VA award, Lily was also selected as the 2019 $500 Tom & Dorothy Moore Memorial Scholarship Award Winner.

Stella Beams received a $700 Award. She is the daughter of Zane Beams of Seedway and is a 2019 graduate of Weiser High School in Weiser, ID, and will be attending Berklee College of Music, one of the nation’s top music schools. Stella plans to double major in Singing/Songwriting and Music Therapy and hopes to develop her skills and grow as a person through Berklee’s unique educational plan.

Colby Beck received a $200 Award. He is the son of Deron and Susan Beck of Seminis Vegetable Seeds and is a 2019 graduate of Parma High School in Parma, ID. Colby will be attending Boise State University majoring in Business this fall and hopes this education path will allow him to work as a full-time sales representative in the Treasure Valley or internationally.

Garrett Kitamura received a $200 Award. He is the son of Grant and Carole Kitamura of Baker & Murakami Produce and is a 2012 graduate of Ontario High School in Ontario, OR. Garrett is also a 2018 graduate of Oregon State University where he earned an Honors Bachelor of Arts in Education and English. Currently, Garrett is attending the University of Virginia School of Law and intends to return to the Treasure Valley to practice labor and employment law in the business and agriculture sectors.

Madison Richards received a $200 Award. She is the daughter of Sharla and Matthew Richards and granddaughter of Owen and Colleen Froerer of Owyhee Produce. Madison is a 2015 graduate of Nyssa High School and is currently attending Brigham Young University-Idaho studying Agricultural Business. She hopes to return to the family farming operation in the future.

The Idaho-Oregon Fruit and Vegetable Association, Inc. was formed in September 1962 as a non-profit corporation under the laws of the State of Idaho. It was formed primarily to give service to the produce shippers on matters pertaining to transportation and other relative industry problems, particularly matters arising out of the preparation, inspection, and the shipment of fresh fruit and vegetables.

As such, the Association provides an effective avenue for its members to collaborate and work collectively on instrumental issues pertinent to the agricultural industry of its area. 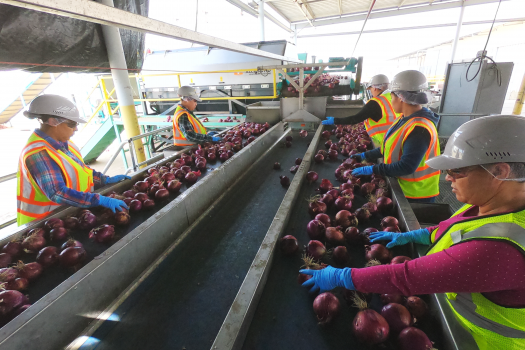