Multiple seed trials were held during the last week of August in the Idaho-Eastern Oregon onion-growing region, with Oregon State University Extension, Seminis and Bayer CropScience each participating.

Onion Business spoke with Stuart Reitz, professor and extension faculty member at Oregon State University Extension, to get his take on how the trials turned out.

He said, “It’s difficult to know the end result without harvesting, but it appears that because of the heat, pink root has affected some of the crop this season, causing lower yields.”

Reitz said Bayer CropScience’s Joaquin seed variety appears to have performed better than others this year. The Joaquin is a stress-tolerant seed that held up well to the excessive heat the area saw this summer. The long-day yellow Spanish hybrid onion was introduced in 2011 and is known for its vigor and stress tolerance that makes it resistant to both pink root and, it is known for being a very vigorous and stress tolerant plant that has high levels of resistance to both pink root and fusarium.

The three trials indicated overall yields might be down, Reitz said, but he added that quality appears to be good across the board. Growers reported that Iris yellow spot virus was kept under control.

Juan Carlos Brevis, long-day onion breeder with Bayer CropScience, said he’s been told the “onion quality is some of the best we have seen in years.”

Crop Update from around the country Aug. 27 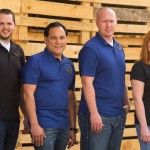