An onion industry highlight of the PMA Foodservice show in Monterey is the annual breakfast hosted by the USA Onions/Idaho-Eastern Onion Marketing Committee and Southwind Farms.

The foodservice show itself is set for July 29-31 at the Hyatt Regency Monterey Hotel & Spa in Monterey, and the breakfast will be held Sunday, July 31, from 8:30-11:30 a.m. at the nearby celebrated Montrio Bistro, where Executive Chef Tony Baker puts forth his incredible culinary creations.

While the breakfast is a by-invitation event, Grant Kitamura, chair of the USA Onions/IEOOC promotions committee, said interested show attendees are welcome to contact the IEOOC office in Parma, ID, for information on attending. The office number is 208-722-5111.

“We are having the breakfast prior to the opening of the show floor,” Grant told OnionBusiness.com. “This is something people really seem to like, and it’s very well received. Last year we had well over 100 guests.” The open-house style breakfast allows flexibility for guests to attend at their convenience, and the highly rated Bistro is known for its excellent fare and “comfortable and classic” ambience.

Now part of the U.S. culinary family, Chef Tony graduated from culinary school in the United Kingdom in 1989 and shared his culinary talents in hotels in England that include the Lucknam Park and Hintlesham Hall. During his time as hotel chef he was awarded the 1991 Frank Hawley Medal for Outstanding Achievement in Culinary arts. He also has shared his culinary talents with the mother of Princess Diana of Wales, Reine Spencer, and he prepared a banquet for a conference hosted by former Prime Minister Margaret Thatcher. Chef Tony has been at Montrio since 1997.

Kitamura said the show and breakfast provide a good opportunity to meet with new and potential customers. “It’s a show that brings in buyers, and it, along with the PMA Fresh Summit, is a show we make a point to attend. Foodservice is a major market segment for the large Spanish Sweets from the Idaho-Eastern Oregon Onion Committee.”

Retail Snapshots for May 19 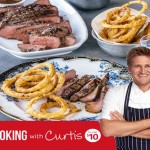