Who’s passionate about Vidalia onions? Through celebrity Chef Curtis Stone and a sweet campaign with Winn-Dixie to cookbook author/chef Whitney Miller and her spin on Southern fare all the way to youthful philanthropist and cancer survivor Lucas Hobbs, Vidalias are in the onion spotlight right now.

Winn-Dixie’s web site gives visitors a page devoted entirely to Chef Curtis at https://www.winndixie.com/shopping/cookingwithcurtis. Several dishes feature Vidalia sweet onions — Grilled Steak with Crispy Vidalia Onion Rings, Chicken and Rice Pilaf with Charred Vidalia Onions, Muffaletta Chopped Salad with Pickled Vidalia Onions and Vidalia Onion Frittata are sweet recipes on the site – and each comes in at under $10 with easy prep. Visitors will recognize Chef Curtis from his regular appearances on NBC’s Today as well as on Martha Stewart’s show, Martha, as well as Conan Obrien, Iron Chef, The Biggest Loser and The Celebrity Apprentice 3 in 2010.

The Vidalia Onion Committee also has two celebrities this year to emphasize the “V*Inspired” marketing message. In addition to a partnership with Whitney Miller, Vidalia Onions is working with Lucas Hobbs, the young cancer survivor who has inspired the nation.

The onion’s farm-to-table appeal fits perfectly with Miller’s own message from her latest book, “New Southern Table,” and the author/celebrity chef is a possible attendee at the Committee’s PMA Fresh Summit booth this year. At present she is featured on Facebook and Twitter with links to her web site and news about her latest book, “New Southern Table.” And Whitney has earned a place in fans’ hearts through her appearances on Masterchef in 2010 at age 22, where she took the title of Fox’s first U.S. Masterchef. 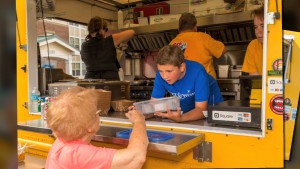 But perhaps the most inspiring story this season comes from Lucas Hobbs, who is joining the Vidalia Onion Committee and the National Turkey Federation to host dinners and food truck events in select cities across the nation.

Lucas came onto the food stage in a most inspiring way: In January 2015 the young man was diagnosed with Hodgkin’s Lymphoma, which is currently in remission. But it was while he watched The Food Network during his hospitalization for the disease that he hit upon an idea for the Make-A-Wish Foundation: Lucas wanted a food truck so he could feed doctors, nurses and patients.

The foundation granted his wish, and soon he and his food truck were visiting hospitals, police stations and homeless shelters in the Minneapolis area, feeding thousands of individuals.

Lucas has been featured on the Rachael Ray Show and has been profiled on national news as well. With the National Turkey Federation, the Vidalia Onion Committee has created food truck events for Minneapolis and Nashville this month and June as the young entrepreneur/philanthropist continues to raise funds for pediatric cancer patients. For more information on this great program, visit Vidalia Onions at http://www.vidaliaonion.org/retail/promotional_campaign. 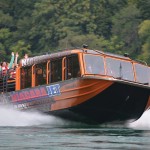