In a June 22 release the Malheur County Development Corp. said it had submitted documents to the Oregon Department of Transportation on June 15, showing it has completed some of the required milestones and made significant progress on others, moving the Treasure Valley Reload Center closer to construction. The facility is to be built in the Nyssa, OR, area.

The project, which was approved in an Oregon Transportation Bill signed into law in 2017 by Gov. Kate Brown, had some $26 million earmarked, and monies have been disbursed as criteria have been met since that time.

Grant Kitamura, president of the MCDC board, said, “Our submission to ODOT should check a lot of boxes for the project and prove that the TVRC project is continuing on the right track”

The documents submitted included an Industry Track Agreement (ITA) from Union Pacific as well as correspondence from Union Pacific relating to that ITA, “indicating their commitment to execute the agreement once payment is finalized.”

Additionally, the documents included a letter from Brad Baird, president of Anderson Perry, that provides “clarity on a permit that is yet to

be finalized”; a Lease and Operator Agreement to be executed between Americold and the Malheur County Development Corporation; affidavits from both Americold’s legal team and the MCDC board, certifying that the document will be signed in short order; and a declaration from Malheur County, explaining their commitment to selling the 65-acre parcel of land to MCDC. The declaration also expresses their acceptance of the terms of the lease

“Lastly,” the release said, “an affidavit from Americold’s legal team confirming that Americold has entered into an agreement with area shippers (was submitted).”

It went on to say that milestones impacted by the June 15 submission include a “signed Industry Track Agreement outlining the construction, use, maintenance, operation and ownership of the industry tracks and Contractor’s Right-of-Entry Agreement which covers

work performed on railroad property,” as well as “all public body approvals, land use approvals and permits.” Other milestones impacted are a “fully executed agreement between Recipient and Terminal Operator; an affidavit signed by the Recipient that an agreement between shippers and Terminal Operator has been fully executed; and proof of land acquisition and delivery of recorded copy of ‘Memorandum of Agreement and Acknowledgment of ODOT Assistance.’”

The progress made by the submission, the release said, “is incredibly significant. Once the Industry Track Agreement is finalized with Union Pacific and the 65 acres has been purchased from the county, construction will be the only remaining task.”

It added, “Four years ago, the project was simply an idea to aid one of the largest industries in the Treasure Valley. Since then, the project team searched for the right land parcel, which required a zone change from Exclusive Farm Use to Industrial for Outright use. The site is now shovel-ready, as we have completed many due diligence items including compaction studies; soil quality studies; wetland and delineation studies; cultural and archeological evaluations; elevation studies; and surveying.

“Union Pacific has been brought on board, which is proved by MCDC’s pending Industry Track Agreement. And, to bring it all together, Americold has been contracted to run the facility.”

John Breidenbach, president/CEO of the Ontario Area Chamber of Commerce, said, “The Treasure Valley Reload Center project has come a long way. Malheur County will not only benefit greatly from the reload center itself, but also from the newly created industrial ground surrounding the facility, which will attract additional industry and jobs to the area.”

Moreover, the release said, “The importance of the Treasure Valley Reload Center project to local agricultural producers has only been emphasized by the recent transportation struggles.”

Kay Riley, manager of Snake River Produce in Nyssa, OR, and a member of the MCDC, said, “We are experiencing an extreme transportation shortage and the completion of this project is needed for the future success of our industry.”

The first bid for the facility, earthwork and culverts, is expected to be released in the next two weeks, the release said, concluding, “Completion of the project is on schedule with anticipated opening of the facility being approximately August of 2022.”

Shuman Farms gives back during the month of June 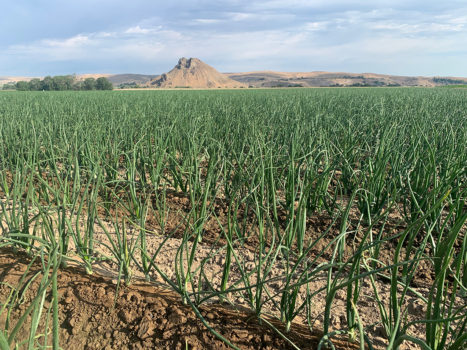