With the semi-retirement of Gary Atkin this year, Jared Gutierrez said he has “big shoes to fill” as general manager of Columbia Basin Onion in Hermiston, OR. But the longtime onion and potato man brings solid experience not only from the Basin area itself but also from his Idaho farming roots, and he’s tackling the job with energy and determination.

OnionBusiness caught up with Jared recently to talk about his role at Columbia Basin Onion and how it fits with his career flow.

“ I come from Southeast Idaho, where I grew up on a small potato farm,” Jared said. “I spent a lot of my life in the potato industry not only being a grower with my father but also in sales and production.”

He and wife Krissy, who’s from Othello, WA, met in college and married in 1994, and the two have four kids, “three active boys and one tough, beautiful girl.” Son Austin is 21, Braxton is 18, Cameron is 16, and daughter Deverie is 12.

In the fall of 2009 the Gutierrez family moved to Washington State, and Jared began working in the frozen food industry on the field side as a harvest manager.

“I quickly got to know many farmers in the area and established good relations with them. In 2013 I became a director of operations/sales for onion produce facility in Washington, which has led up to where I am at now as the new GM for Columbia Basin Onion in Hermiston,” Jared said.

Columbia Basin Onion was launched in 2012 by grower Alan Cleaver, who started the farming operation in 1979.

“Over the years he ran his onions through other facilities until June of 2012 when he built began running Columbia Basin Onion, LLC,” Jared said.

The grower/shipper operation is “progressively moving forward in the industry with not only conventional onions but as one of the largest organic onion producers in the United States,” Jared continued.

“Alan Cleaver has taken a stronger approach with the quality and size of his farming operation. He also has been implementing more automated equipment in the packing facility, making it one of the premier onion warehouses in the industry. All of our fields are overhead circle pivot irrigation, with the majority being monitored via mobile or computer technology. We also have implemented precision farming with GPS in our tractors,” Jared said. He noted that the Cleaver onions are 100 percent mechanically harvested.

On the shed side, Jared said, “We have one of the most innovative packing onion sheds in the industry. The majority of our equipment is computerized with new automated features. For instance, our electronic sizer goes by density with external optical grading, and we have most recently installed fully automated baggers for 50s & 25s. We have automated baler bagging for consumer, and we have automated palletizing.”

In addition, he said, Columbia Basin Onion utilizes controlled atmosphere in the storages for curing, drying and cooling.

“This helps us create longevity in our onions to maintain quality in storing for many months,” he said.

The company sells mostly to wholesale and retail, with a good customer base also in the process side of foodservice. All sizes and colors are available close to year-round.

“This year we only had about three weeks of downtime,” he said.

Most of the onions are shipped by truck, although Columbia Basin Onion does use some rail out of Wallula.

All colors and sizes are available, Jared said. “Our conventional onions consist of yellow, reds, whites and sweets, and on the organic side we have yellows, reds, sweets and, in some select years, limited whites.

Direct seed planting runs from mid-February through April; overwinter planting is done in late August and early September, with transplants put in around mid-March, Jared said.

“Columbia Basin Onion grows early varieties, such as overwinters and transplants, along with direct seed, and those earlies extend our season to anywhere from 10 to 11and a half months out of the year,” he said.

CBO shares the common concern of labor with other ag enterprises, and Jared said Oregon’s high minimum wage is a factor.

“Labor wage is more of a concern in the shed today than the actual labor. That is what has prompted us to implement more automated equipment,” he said. “As for farm side, both labor and wages are a growing concern.

We asked Jared if he’d like to weigh in on the proposed renegotiation of NAFTA, and he said, “I would like to see NAFTA re-negotiated or structured for the agriculture side so that it evens up the playing field. Although it is good for some ag commodities, it is not for others.”

And as for the future of the domestic onion industry, Jared Gutierrez commented, “The onion industry is going to continue to evolve and likely grow more towards the consumer side and specialty packs, but it still comes down to keeping it real in the supply chain by not overproducing this commodity. Hopefully the onion industry is kept in perspective.”

Thanks to Jared for providing additional photos of Columbia Basin Onion. 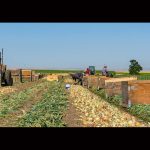 Market and Crop Update for July 20