Jason Pearson: ‘Coming home was the best decision I could have ever made’

By Kathleen Thomas Gaspar
With more than two decades in the fresh produce industry, Nyssa, OR-born and farm-raised Jason Pearson has worn a variety of hats for several different operations. During his career he’s worked as a truck driver, a warehouse manager and also as a buyer.

His jobs have taken him to several Northwest locations, including Layton, UT, and Seattle. And today, with a wealth of experience under his belt and an absolute love of the onion industry and the Treasure Valley of Idaho-Eastern Oregon, Jason finds himself back in his hometown of Nyssa holding the position of Onion Commodity Manager for Eagle Eye Produce.

In many ways, it’s full circle for this native son.

His current position, he told OnionBusiness.com, involves selling and placing orders for the Idaho Falls-based company. He’s one of two people in the Nyssa office, working alongside Kelly Ferrenburg, who handles transportation, and working closely with multiple sales personnel in Idaho Falls, New York, and North Carolina.

Quick to give credit to his colleagues, Jason said, “These wonderful people make my life a lot easier.”

He also credited Eagle Eye with his homecoming, which took place during the last 18 months. “I’ve been with Eagle Eye two times,” he explained. “The first was for about 11 years and this time for a year and a half.” Though from Nyssa, which is, of course, a major spoke in the Treasure Valley onion wheel, Jason started his corporate work as a driver and then moved into the position of warehouse manager and buyer during his first stint.

The son of a farming father, Jason said he’d worked the family farm throughout his childhood, and he has ag in his DNA.

“I always loved the agriculture industry, but I wanted to find my way, not on the farm,” he said, adding he always held tight to his roots and did stay in the “produce side of business.” His two brothers, he said, went into careers outside the produce industry.

After graduating from Nyssa High, Jason went on to earn his business degree from College of Idaho in Caldwell.

During his time with Charlie’s, Jason said, he was “always buying from my Eagle Eye Produce family,” and “when the opportunity came to return to my roots and live in my hometown and work for a company I love, I jumped on it.”

He went on to say, “Eagle Eye has always been a family to me, even when I took another position with a couple of companies in Seattle.” 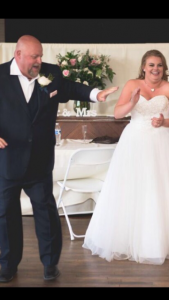 Jason with daughter, Jessica at her wedding.

Along the way, the Jason was blessed with “two beautiful daughters that I raised,” he said. “One lives in Seattle, and the other lives in Utah.” Elder daughter Jessica was married last June, and Mya is getting married this June.

“They are very important to me, and I cherish the times we get to spend with each other,” the proud dad said. He added he has “no grandchildren yet, but I can’t wait!”

Family and his job are huge parts of his life, but Jason said, “When I am not at my desk, I like to fish and go for drives, and I love to play softball. I also love to work in the yard and around the house. The feeling you get when you accomplish a task at home is awesome.”

His return to Nyssa also involves a new house, and he said, “I look forward to redoing the landscaping. That will keep me busy all spring and summer.”

To fill any possible spare moments, Jason is also on the Nyssa Chamber of Commerce. “I am trying to give back to the community that gave me so much when I was a child,” Jason said. “It was fun growing up here, and I want it to be fun for future generations to come.”

And he wants the area’s onion industry to remain strong, noting recent movement in the market a good sign.

“I’m very pleased,” he said. “Demand has been high, and my hope for the first quarter of 2019 is that it continues in the right direction. Our growers need to be able to make up from the stress in the market from the beginning of the season.”

He continued, “I believe that as other growing areas ramp up, we should be able to sustain our market. With weather having been an issue this year, a lot of the other markets have been stressed. And on the Mexican side I think they will keep a lot internally. We have been very blessed this year with an abundance of good quality onions.”

Life is good for Jason Pearson, and he is eager for the challenges and rewards that lie ahead.

“In the next five to 10 years I see myself doing the same thing I am doing now,” he said. “I am very appreciative of the relationships I have with sheds and growers in the area. I love the area and the people that live here.”

Full circle is a good thing, he said. “Coming home was the best decision I could have ever made, and I look forward to the opportunities I have to represent the industry and community I love.” 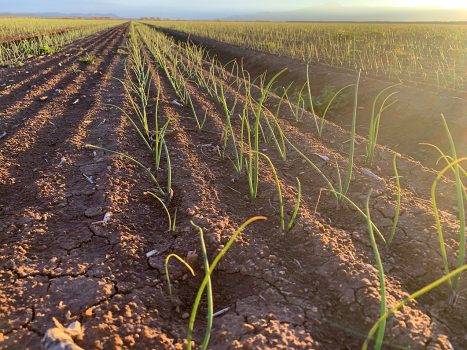