MARKET
Washington/Idaho-Eastern Oregon:
John Vlahandreas with Wada Farms in Idaho Falls reported from his Salem, OR, office on Jan. 23, telling us, “Demand for us has been really good this week. We have pretty equal demand across the board for all colors and sizes. Of course, whites are hard to come by and are available in limited quantities, with prices ranging from $25 to $26 out of Washington and $30 out of Idaho – and with prices rising almost daily.” John said the quality “has been really good,” adding, “The only question now is how much longer everyone is going to have onions on hand. That’s still an unknown.” On transportation, he said, “Seems like everyone has adjusted to the freight increases, and availability has been pretty good.”

Idaho-Eastern Oregon:
Jason Pearson with Eagle Eye Produce in Nyssa, OR, reported on Jan. 23 that the market is steady this week. “Demand is a little slow this week, but we are still moving plenty of onions,” he said. “We are out of whites, but demand is pretty much the same for reds and yellows. We had a good jump in the market, and it is holding. We all just need to remember to hold it, despite a little dip in demand.” In terms of quality, Jason said, “Quality is very good.” And about transportation, he said that it has also been pretty good lately. “You just have to get the trucks when you can, and winter storms have slowed up some routes, but nothing that’s a big deal.”

Herb Haun with Haun Packing in Weiser, ID, said on Jan. 23 the market has been “pretty good” in January. “Prices are up for the first time since September, Herb told us. He said, “Quality remains very good, too. We’re short on whites but do have a few left, and everything else is very manageable.” Herb said Haun Packing expects to clean up “fairly early in March,” noting the growing operation could be in the fields “by March 10, although anything could happen between now and then.” He also said Haun is working with additional growers in 2019 and “could change direction a bit.”

Dan Phillips with Central Produce Distributing in Payette, ID, provided a very positive report this week. “Like a lot of sheds, we are out of whites, but reds and yellows are moving well in all sizes,” Dan said. “I am not sure what it is, but ever since the holidays came to an end, everyone has decided to eat onions. And the market is holding steady, too.” He continued, “We have exceptional quality. In fact, we were just talking about it yesterday. The pack-outs we are getting at this time of year are amazing!” Transportation has gotten better as well, he said. “We are more confident about getting trucks. While it might get tight for a day or two, it loosens back up. Rail car availability seems to have gotten a little better too. All in all, it’s a good scenario right now.”

Utah:
Don Ed Holmes with The Onion House in Weslaco, TX, said on Jan. 23 his Corinne, UT, deal was about 10 days from being finished. “We’ve had real good movement the whole season,” he said of Utah. “And prices are better than they have been.” Don Ed noted that “this time of year you’ve got bad weather” in the Northeast and along much of the Eastern Seaboard, which can slow movement temporarily. But he added, “Overall the market is better than where it was a month ago, and hopefully we can maintain the numbers.” He said during the transition weeks ahead, “there will be a few people going out and some in Mexico coming in.”

New York:
Rick Minkus with Minkus Family Farms in New Hampton told us that demand is good this week. “We are steadily busy,” Rick laughed. “In New York, the onions are hit and miss on quality, and so we are bringing in onions from the Northwest to supplement, and demand is good.” He said the market is steady. “The market is definitely holding now,” Rick said. “Buyers complained, but they have swallowed the prices, and they’re still ordering. White prices are high because of lack of availability. I wouldn’t say they are extinct, but let’s say they are on the endangered species list. Medium reds are getting scarce, and medium yellows are tight, too. If you want 10 loads of medium yellows out of the Northwest, you’re going to make a bunch of calls. All of this makes me very optimistic about the market moving forward.” On transportation, Rick said, “It really hasn’t been an issue, and Railex has been doing a pretty good job.”

Mexico:
Don Ed Holmes with The Onion House in Weslaco, TX, said he’ll have sweets from Mexico next Tuesday. “We’re pulling onions now, and they’ll be clipped this weekend,” he said. The Onion House will have bags and cartons, he said, adding that the Mexican sweets will start shipping right around the time Utah cleans up.

Broker’s Perspective:
Rick Greener with Greener Produce in Ketchum, ID, reported to us on Jan, 23, noting, “Well, trucks are calling in, which tells me that it might be turning out to be that typical time of year when things slow down a little.” He continued, “You know what I wish? I wish that OnionBusiness would send suspenders to all the pertinent people with a note that says, ‘Keep your pants up!’ It’s not necessary for packers to just run for the sake of running, then look at their floor and then panic and start doing deals to get them out the door. Everyone needs to relax and hold the market. Go to lunch. Catch their kid’s ball game. The market will hold if everyone doesn’t start marching in the other direction.” Rick added that quality has been great for all the areas he is shipping. “We’re shipping really high-quality out of Idaho, Oregon, Washington and Utah, with some out of Michigan,” Rick said. “And YES! I have whites – so call me.”

CROP
Texas Rio Grande Valley:
Don Ed Holmes with The Onion House in Weslaco said on Jan. 23 the Rio Grande Valley 1015 crop is “looking good.” He said the region has had a “really cool January, not cold but cool,” and the onions “haven’t jumped out yet.” But he noted February will bring warmer temps, and the onions are on track. 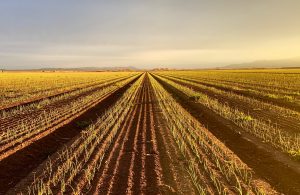 New Mexico:
James Johnson with Carzalia Valley in Columbus told us Jan. 23 the crop looks good and is in full dormancy at this point. “We haven’t planted the spring seeded yet,” James said, adding, “We’re all looking at the buckets in the barn and wondering when we’ll get started.” He said spring seeding will likely be done during the first couple of weeks of February. James also said the operation is “staying the course” with its program, “maybe upping the red acreage to help stabilize the red program.” Harvest of sweets, whites and reds will kick off around May 20, he said.

Thanks to James for sending this week’s featured image as well as this beautiful crop photo. It looks like the onions go on forever.

Vidalia, GA:
Danny Ray with Ray Farms in Glennville, GA told us “the crop is looking good.” And the proof is in the pudding with the awesome shots Danny sent. 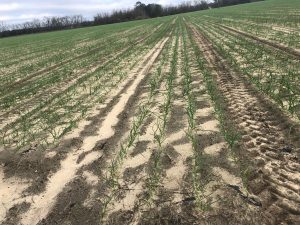 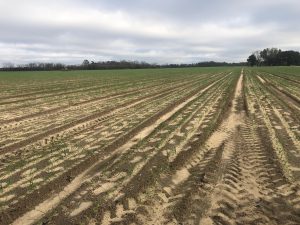 Jason Pearson: ‘Coming home was the best decision I could have ever made’