Our logistics guru, Cain Adams at Trinity Logistics/Longboard Logistics in Meridian, ID, sent us a message of real optimism tempered with just as real pragmatism this week.

“Every day in freight has been different,” he said. “Some days customers are struggling to get orders. Other days they are slammed. It’s way up and down on demand.

He continued, “We have been pulling out of Idaho, Oregon, Washington, Texas, California, Arizona and New Mexico this week. Most were coming from Texas but seem to be shifting over to Brawley. They got some heat this week though – 107 degrees.”

Temps weren’t the only thing rising. “Freight rates went up the last week or so,” Cain said. “We thought they would be lower due to fuel prices, but the carriers are asking for higher rates to make up for lost revenue over the past month.”

And, he said, “We are seeing volume come up and a lot of pricing going on this week. Places are opening up, and we can see lanes coming back on line. Trucks were super loose last month but tightening up on lanes, especially out of Idaho, Oregon and Washington. Rates are still good on most lanes.”

That said, he added, “The hardest is to the Northeast. Not much coming back out of there, plus tolls has them asking for more per mile.”

Cain said this looks like it might stick around. “We expect it to be about the same for next week and really pour on around May 20-22, Memorial Day weekend.”

With a cautionary note, he said, “I just hope the numbers don’t blow up. I think without a vaccine there isn’t much of a point to keep things closed. Personally, we are doing six feet, washing hands and not going to many places even if they are open.”

As the effect of the Coronavirus continues, Cain said, “Grocery stores are going to start limiting meat purchases. People are talking about meat shortages, and the hoarding has commenced. Crazy right? Maybe it’s a good time to get a fishing license if you don’t have one.”

Closing with a laugh, Cain said the conversation-starter at his house could be… “Look, Dad! I got us some supper!” 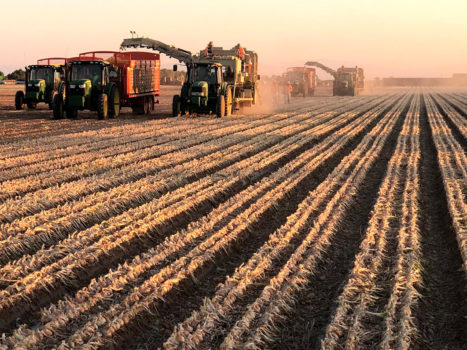