Our friend Robert Bell from Western Onion in Camarillo, CA, was in Ontario, OR, at the Malheur Research Station.

“Eric Feibert is growing the bulbs that we will grow for seed here locally,” Robert said. About the Treasure Valley testing facility, he said, “Our hope is that these hybrid varieties will do better if we produce the seeds in Oregon instead of New Zealand. We will also be doing this in the Central Valley.”

Robert continued, “We’ve been working on this project for many years, and we’re getting close to producing an early long-day red onion that can travel three weeks on the water and arrive unscathed.” He said the goal is to have a red that is also resistant to pink root and foliage disease and is solid.

“We’re getting excited now that it’s getting close, and the samples we’ve shown around have been well received. We’re very thankful for those growers that have helped support our field trials these many years.”

Many thanks to Robert for sending the awesome photo gallery 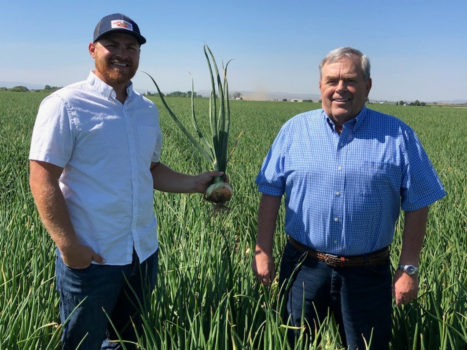