Baker & Murakami Produce, one of the largest onion shippers in the Northwest, has welcomed longtime Idaho-E. Oregon father/son onion growers Paul and Logan Skeen as ownership partners in the Ontario, OR-based operation.

In making the dual announcement, Skeen spoke of connections that announcement the “new” additions to the company have – Paul and Logan Skeen are his father and brother, respectively, the family is in its sixth generation of farming and third generation of growing onions.

Trish, who has more than 30 years’ experience in onion and produce sales, actually began her career in Ontario, working with Jerry and Steve Baker, who with Grant Kitamura are managing partners in Baker & Murakami Produce.

Cameron Skeen praised the experience and skills each of the individuals brings to the company, saying, “My Dad started farming in 1973 and has been a key figure in the onion industry since then. Logan officially started farming in 2012 after he graduated from Utah State U. with a degree in Ag Business.”  And Cameron grows onions independently as Bullet Onion.

His father and brother, he said, came onboard at Baker & Murakami earlier in the year following the retirement of some of the company’s original grower members. Skeen said that the addition of Paul and Logan “… ensures a continuation and an increase of high-quality onions in the program.” He added, “With the next generation of onion growers firmly in place, we have the potential to expand on that in the future.”

In addition, Skeen said, “There are some other major benefits to their combined operation that we are excited to have. The land they farm is some of the most productive and sought-after land in the area. The fertile soils and senior water rights have allowed for dedicated production year over year no matter what situation the rest of the Treasure Valley might have with water or other issues.”

Their land base and water rights allow them to start the season early so “they can be ready with new crop onions right out of the gate,” he explained.

“On the flip side of early onions, they also have state-of-the-art, on-farm refrigerated storages that allow them to store onions until our Idaho-E. Oregon marketing window has closed in late April or early May. We couldn’t ask for a more turnkey operation to join the fold,” Skeen said.

He also said the return of Trish to the site of her first job in onions is also being met with favorable response across the industry.

“She hit the ground running when she came through the door, and we are looking forward to her making major contributions to our growth as a company. We are absolutely pumped to have Trish as part of our team!” he added.

Her career kicked off in the 1980s, when the Baker father/son team of Jerry and Steve Baker was with DeBruyn Produce in Ontario. Trish actually worked at the same site where three shipping companies – DeBruyn, Baker Packing and now Baker & Murakami – have since called home, and she said her return to Ontario is “like coming home. Onions is where it all began.”

Over the course of her career, Trish has worked for a number of onion shippers, including Curry & Co. in western Oregon and Agri-Pack in Washington. And she said of the move back to the Treasure Valley, “I am excited to be back with Jerry and Steve on the sales desk and with the rest of the Baker & Murakami team, keeping our focus on exemplary customer service and the highest quality.” She described Baker & Murakami as “progressive, innovative and continually improving.”

Skeen agreed, saying former Murakami Produce had transitioned from a “traditional custom packer to a more vertically integrated model six years ago, and that was taken to a new level with the merger of Baker Packing and Murakami Produce in 2017.”

Communication has been a vital component in the success of the new company, and Skeen said that “with the volume of onions we pack and the acreage we account for, it takes a tremendous amount of coordination and organization to keep everyone moving in the right direction.”

That well-coordinated and organized forward movement has removed “any barriers that may have existed historically between the custom packer and the growers,” he said. “As vested business partners, we are all in the same boat together, and it’s in everyone’s best interest that we are all successfully moving in the same direction.” 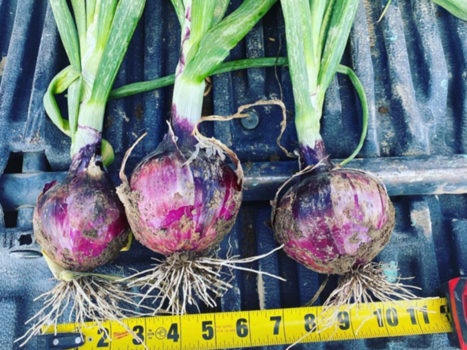 Idaho-E. Oregon kicks off 2020 season with optimism and a good crop