Market and Crop Update for April 19 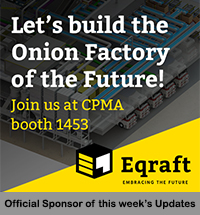 MARKET
California Imperial Valley:
Jessica Peri of Peri & Sons based in Yerington, NV, told us on April 13 the El Centro harvest would begin April 14, with first loads shipping earlier this week. She said warm weather in the Imperial Valley had brought on good size, and she noted there “are very few mediums.”

Washington:
Larry Denke with CSS Farms/Agri-Pack in Pasco said on April 18 Agri-Pack had finished packing last week, and he was selling off the floor in the final days of the 2017 crop season. “It was a good year overall,” Larry said of the ending season. “We finished a little earlier than normal, but that’s a good thing this year.” He said upgrades over the summer will include the onion line, and Larry noted that marketing is being handled by RPE. “We have a good future with RPE,” he said. “They have a lot of good ideas.”

Oregon:
Stefan Matheny with River Point Farms in Hermiston told us on April 18 that demand is good. “Demand for the last several weeks has been very solid,” Stefan said. “The market is getting stronger for yellows and is steady on reds too.” He said River Point is shipping all sizes in yellows and reds and will continue through the first part of June. “We are fulfilling our contract business but will have open market onions available throughout the balance of our storage season,” Stefan said.

Idaho-Eastern Oregon:
Ryan Stewart with Fort Boise Produce in Parma, ID, said on April 18 that company will ship through early May. “We have yellows and reds available, with fewer reds,” Ryan said. “We’re shipping all sizes, and quality has held up well.”

Idaho-Eastern Oregon/Washington:
John Vlahandreas with Wada Farms in Idaho Falls reported from his Salem office on April 18. “We are still shipping out of Idaho-Eastern Oregon, but we will be finishing up there this week,” he said. “We shipping reds and yellow onions from two sheds in Washington, and we will continue to ship their product into May.” John said the sizing is predominantly supers, colossals, and jumbos with good quality. “The market is stable this week, with a slight increase for jumbos,” he said. “That increase should continue as Texas and Mexico finish up.”

Mexico:
Dale DeBerry with AllVeg Sales in Boerne, TX, told us April 18 he’d be moving onions from Mexico for another couple of weeks. “They’re moving really well now,” he said. “And the market is up a little. Demand has been very good, with jumbos and colossals moving best.”

Texas Rio Grande Valley:
David DeBerry with Southwest Onion Growers in Mission told us on April 18 that with other domestic shipping areas, along with Mexico, cleaning up the market had improved, and the Rio Grande Valley was in its “midseason form” with 16-20 loads a day. “Yields and quality are very good,” David said. “And the open market has been improving over the last week or so.”

Don Ed Holmes with The Onion House in Weslaco said on April 14 he was finishing the Mexico deal, with one late field starting April 19. The Rio Grande Valley started last week, and he said early yields and sizes have been very good. “Quality is outstanding,” he said. “We’ve been having good weather, and the market is a little better on big onions now. We’re tight on supers and colossals, and jumbos are also moving well.” Don Ed added, “It’s not a real big crop this year, and it came on a little later. We’re on track to go to May 15-20 with all sizes and colors, and we have consumer packs and cartons.” 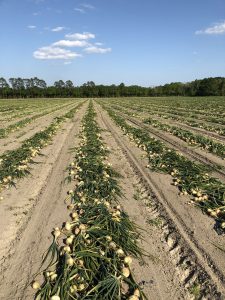 Vidalia:
Danny Ray with Ray Farms in Glennville reported on April 18 that Ray Farms is very busy getting ready for the Friday start date. “We are very busy and we will be shipping full steam on Friday,” Danny said. “We’re really excited, and the onions are looking good – nice and dry and getting drier in the fields every day.” Danny added, “We’re anxious to get going, and customers are too. We’re receiving more and more calls every day!” View additional photos from Danny Ray included at the conclusion of our updates.

Dale DeBerry with AllVeg Sales in Boerne, TX, said B&B Farms in Uvalda has a very good crop this year. “There aren’t a whole lot of colossals, and the crop is heavy to jumbos.” Recent rain briefly interrupted harvest, but Dale said on April 19, “They’re back in the fields today and will start shipping Friday.”

New York:
Michelle Gurda with A. Gurda Produce in Pine Island reported that demand is good this week. “Demand is good and the market is tight right now on jumbo yellows and reds,” she said. “The market is a little easy on mediums in both colors and steady.” Michelle added, “The market is slowly increasing on jumbos and is expected to continue.” Michelle said A. Gurda is shipping its New York product for the next couple of weeks and quality is very good. “We are also shipping onions out of Texas and Mexico, and the quality has been good.”

CROP
California Imperial Valley:
John Vlahandreas with Wada Farms in Idaho Falls, ID, said on April 18 the Caston Imperial Valley crop will start shipping Tuesday, April 24. “We will be going full steam by next Thursday, April 26, or Friday, April 27,” he. “For the most part, we are looking at mostly larger sizes with this crop, with some acres of mediums.”

California Central Valley:
Jessica Peri of Peri & Sons in Yerington, NV, said on April 13 the company’s Firebaugh, CA, crop was doing very well, sizing heavier to jumbos and is on track for an early June start. Between Firebaugh and El Centro, Peri & Sons will cover the April-October window, she said. This year the site added a new finished product room, which will provide organic sweets, reds and yellows into August.

Washington:
Larry Denke with CSS Farms/Agri-Pack in Pasco said the new crop overwinters could start June 20. The company, with RPE handling marketing, has added organics to its 2018 lineup with all colors and all sizes available in the certified category. 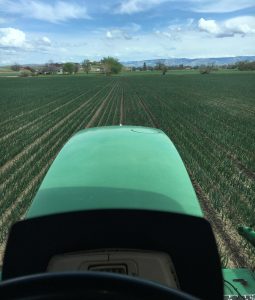 Walla Walla:
Michael J. Locati with Pacific Agra Farms in Walla Walla told us April 18 recent rain and wind in his area didn’t impact the crop negatively at all. “We’re still on schedule for a mid-June start,” he said. “The onions are sizing up well, although it will be nice to get a few more heat units.” He said Pacific Agra Farms will stick to its marketing plan with Keystone Fruit Marketing and its office in Walla Walla. All onions are packed at Walla Walla River Packing and Storage, he said. This year the company has between 10 and 15 percent of its overall volume in organics, and Michael said the Walla Walla Sweets are available in all consumer packs and 40-pound cartons. And many thanks to Michael for supplying us with this week’s featured image of his beautiful Walla Walla crop.

Oregon:
Stefan Matheny with River Point Farms in Hermiston told us River Point’s overwintering onions will start shipping the second week in June. “The crop is looking really good,” he said. “We had a mild winter, and even with the recent cooler weather, overall we are in good shape for harvest.” Stefan told us River Point will finish direct seeded planting within days. “We will be complete with our storage, organic yellows and sweet reds this week” he said. “And we have kept the same program as we had last year.”

Idaho-Eastern Oregon:
Ryan Stewart with Fort Boise Produce in Parma, ID, said on April 18 that the 2018 crop is completely planted, and the program will be “very similar to last year’s.” Ryan said because the growers got into the fields somewhat early, Fort Boise should be ready for the new season in August “if the market is where it ought to be.”

Texas Winter Garden:
David DeBerry with Southwest Onion Growers in Mission said the Winter Garden crop looks great. “The onions are disease free, and we’re set to start May 4-6,” he said. Southwest will ship through June 10, and David said all sizes and colors will be available. At the same time the Winter Garden deal is going, Southwest will also be shipping whites from Coahuila, MX, just across the border. “We have a fair sized Coahuila white crop this year,” he said.

New York:
Michelle Gurda with A. Gurda Produce in Pine Island said the operation started planting last week. “We are going with the same acres that we had last year,” she said. 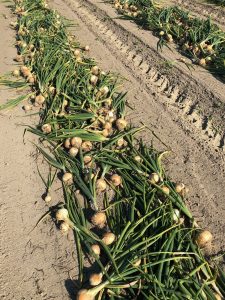 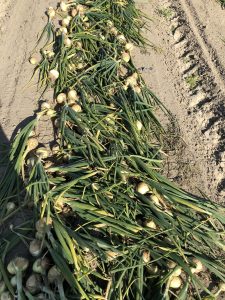