MARKET
California:
Michelle Gurda with A. Gurda Produce in Pine Island, NY, told us Aug. 8 that A. Gurda continues to ship onions out of California. “Quality has been decent,” Michelle said. “Demand has been steady but has slowed since July. This is pretty typical. August always seems to be a little slower than the rest of the summer months.” Michelle said the red market remains strong. “Reds are doing stronger than jumbo or medium yellows, but still the yellow market has remained steady all season.”

Washington:
Brenden Kent with Sunset Produce in Prosser told us on Aug. 8 that Sunset has been shipping since July 27. “Quality looks very good, and we are off to a good start,” he said. “The heat has presented some unique challenges, but we have been able to harvest at night and early in the morning, so the onions are coming in dry and in good shape. We are shipping reds and yellows right now and will start on whites tomorrow.” Brenden said demand has been steady. “We are really encouraged. Even the yellow demand and market is looking really good for us.” When asked about transportation he said, “So far, so good. We have been able to load flatbeds, so our fingers are crossed that transportation remains good through at least the fall.” Brenden noted that exports could be more available this season. “For the first time in three or four years we are seeing some opportunity for exports,” he said. “We are getting reports that Japan’s crop is below average, so we think there could be some doors opened that weren’t available in recent years. At the very least, this will help keep the onions moving in the pipeline.”

Idaho-Eastern Oregon:
Ashley Robertson at Fort Boise Produce in Parma, ID, took a quick break on Aug. 8, the first day of shipping for that operation, to tell us all colors and sizes are going out. “It’s been busy,” she said. “It’s Day One, and it’s definitely going.”

Dwayne Fisher with Champion Produce Sales in Parma, ID, told us Aug. 8, “Onions are rolling in, and we will be packing Tuesday, Aug. 14, with shipping available Wednesday, Aug. 15. We are excited to get back into our own product and provide our customers with the excellent quality and service they know they can count on at all of our Champion Sales facilities. Quality looks to be excellent and will just continue to improve with each passing week.” Dwayne continued, “We are starting our season with Spanish Medallion and Red Angel Varieties, and we are thrilled with the skin they have for this early in the game. The forecast is for more record heat the next few days, but our drip onions have weathered the brutal heat this summer very well.” He added, “We are looking forward to a great season!”

Kay Riley with Snake River Produce in Nyssa, OR, said his operation will start shipping Tuesday, Aug. 14, and he described the onions that are coming in now as “looking great!”

Broker’s Perspective:
Jason Vee with Vee’s Marketing in Lake Nebagamon, WI, told us Aug. 8, “It’s go time in the Northwest. I ship strongly out of Washington for most of the year, so it feels like home base for me. I’ll have reds, whites, yellows and Heavenly Sweets on Monday. Trucks are typically easier for me in the Northwest, so I’m looking forward to that. Conversely, there are three consecutive, crazy hot days in the Northwest this week. I hope the overnight lows balance that out, so we can avoid quality issues.” Jason added that “111-degree high Wednesday is not an ideal harvest condition. Be careful loading flatbeds this week.”

He continued, “Summer is hard here. My volume increases about 30 percent in May, June and July. Shipping from so many different districts and states makes it difficult to program onions and coordinate freight. Having said that, I take steps to minimize problems. Without giving away all my secrets, I try to lean heavily on whoever I think is the best shipper in a district to establish expectations. I need that shipper to know my volume, quality and operation expectations.”

He said, “I work with Shiloh Produce in New Mexico. I’m at the tail end of my season with Shiloh, and it’s been the most trouble-free season I can remember. I got the wrong stickers on a few pallets of carton sweets, and I had four pallets flagged for quality that were borderline around 5 percent defects. I’m not a giant, but I do enough volume that finishing New Mexico having flagged only four pallets for quality is remarkable. So, hats off to Stormy, my man, Trey, and the rest of the team at Shiloh for a great season.”

CROP
Idaho-Eastern Oregon:
Paul Skeen of Skeen Farms in Nyssa, OR, and president of the Malheur Onion Growers Association reported to us on Aug. 8 that the Idaho-Eastern Oregon crop is healthy and in good shape. “We are very fortunate this year that we haven’t had any issues affecting the crop,” he said. “It will be an average crop for size, but we are very encouraged that it looks like we will have onions that will store very well throughout our season.” He continued, “In fact, between Idaho, Oregon and Washington there should be plenty of supplies to accommodate our U.S. customers without any help from imports.”

Utah:
Don Ed Holmes with The Onion House in Weslaco, TX, said the Corinne, UT, crop is growing well, and growers will start undercutting in September. “The crop is coming along real nice,” he said.

Colorado Western Slope:
David DeBerry with Southwest Onion Growers/Onions 52 in Mission, TX, told us Aug. 8 that the Montrose-area onion crop is “progressing normally and may be a little earlier than first thought.” He said of the intermediates, “There will be some reds and yellows and some sweets around the end of August.” Later storage onions are also progressing well, and the crop is expected to finish normally, he said.

Don Ed Holmes with The Onion House in Weslaco, TX, said his Western Slope onion deal will likely see “two more irrigations, with clipping starting right after Labor Day.” He said the intermediates are hand-topped, and he added, “The crop is progressing really nicely.

Northern Colorado:
Bob Sakata with Sakata Farms in Brighton said spotty hail had hit the region earlier this week. “For us, it caused some delays but isn’t disastrous,” Bob said. He said the farm is still on track to start just after Labor Day.

Mexico:
Don Ed Holmes with The Onion House in Weslaco, TX, said his growers in Mexico are “right around the corner from putting seed beds in for transplants.”

David DeBerry with Southwest Onion Growers/Onions 52 in Mission, TX, said crews have started planting in Mexico “and will get real busy in about two weeks.” 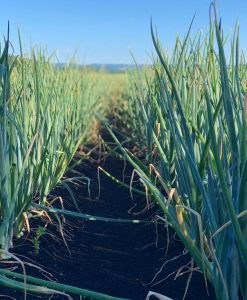 New York:
Michelle Gurda with A. Gurda Produce in Pine Island, NY, told us
Aug. 8 that the Gurda crop is progressing nicely. “We’ve received quite a bit of rain lately, so we’re not sure how that will impact the crop,” Michelle said. “But overall everything looks really good, and we have a ways to go for growth. We’ll get starting in mid-September with our New York onions.”