Market and Crop Update for February 22

MARKET
Washington
Brenden Kent with Sunset Onions in Prosser, WA told us that demand seems to be increasing this week. “We have been very busy,” Brenden said. “We have been doing more program business in foodservice and retail. I also expect demand to come back in the next week or two. We are fortunate that Easter is early this year, and we expect heavy demand the week of March 12 and even the week of March 19.” Brenden said pricing has been somewhat disappointing this week. “We assume that some of the lower pricing may be due some distressed product out there. If shippers are sitting on some distressed product, they are going to discount it in order to move it. As for us, we have all sizes and colors with excellent quality and we expect to have open market onions through the end of March and the first part of April. After that, we will finish our season in mid-May with our committed program business.”

Idaho-E. Oregon/Washington
John Vlahandreas with Wada Farms reported from his Salem, OR office on February 21. “Demand this week is moderate,” John said. “We are seeing demand pick up toward the end of this week which is nice. It seems like there is increased demand for the smaller sizes.” John told us that availability is good. “The availability of whites is starting to taper off, but we should be shipping yellows and reds out of the Northwest through at least the first part of April.” John said pricing has leveled off. “We are happy that transportation has gotten better. We are finally getting freight quotes that allow for honest delivered prices.”

Idaho-E. Oregon
Herb Haun with Haun Packing in Weiser, ID said that this week’s demand is flat. “I would say that even though the market is slow, it’s steady,” Herb said. “As an area, we are going to see four to five shippers finishing up next week. We expect to finish shipping around the 7th or 8th of March.”

Dwayne Fisher with Champion Produce Sales in Parma, Idaho said, “Business for us has been very normal for this time of year. Our company weekly shipments (for Feb) are about eight loads ahead of last year and the year before, so I would call that normal and steady.” He added, “The current cold weather pattern has brought our storage temperatures back to where we like to see them and looks like the storage temps for the next couple weeks will be favorable. We have product in our cold storages to get us to the middle of April.” Dwayne added, “For this time of year moving forward, “Knock on wood,” our quality remains very good. This week some huge checks were written, and onion seed is sitting in our farm shops ready to go when Mother Nature says start! We are anticipating and praying for a normal planting window this year (early/mid-March start – early April finish).” Dwayne said, “Last year was no fun, so we will be grateful not to repeat that deal. As I said above, storage temperatures are very good, which means too cold to plant, but it will be here before we know it. Seems like some long faces on the marketing side of things currently, but for us, inventories are just perfect to get us through the next eight weeks of our normal season.” Dwayne said that Champion’s Utah production will wrap next week, “right on a normal schedule, and then we will be all Idaho until we transition to California the middle of April.”

Mexico
Mike Davis with Tex-Mex Sales in Weslaco, TX told us that demand is getting better this week. “Demand has been slow for the last three weeks,” Mike said. “But you have to keep in mind, that it’s not just onions. Demand for commodities across the board has been slow.” Mike added, “We have been happy with our pricing. However, the market is following demand and nationally the prices seem to have dipped a little. Overall, the market is following what the Northwest is doing.” Mike said some customers in certain parts of the country are switching to new crop. “They are happy with the onions we’re shipping and have decided to make the switch.” Mike noted that the Tex-Mex quality is excellent. “I can’t speak for everyone, but our quality is looking very nice. We have all sizes and colors available.” Mike says Tex-Mex will be increasing their movement in the weeks to come and noted that transportation is getting better.

CROP
South Texas
Mike Davis with Tex-Mex Sales in Weslaco, TX said on February 21 that their Texas crop is coming along nicely. “We should have some Texas 1015’s around the first part of March, but the bulk of our Texas crop won’t start really moving until April 1st.”

California/Imperial Valley
Steve Gill with Gills Onions in Oxnard, CA told us that the Imperial Valley, CA crop “looks excellent.” He said, “The crop is progressing well. We had a little warmer than normal weather, but overall the weather has been good, and we expect to have normal sizing and yields.” Steve said that they should begin harvest between April 10 and April 15.

John Vlahandreas with Wada Farms reported from his Salem, OR office that the “Imperial Valley crop looks fantastic.” He said, “We haven’t had any extreme weather, and the stands look excellent. Out of all the acres planted, our grower Troy Caston, tells us that there are only 5-8 acres that he isn’t happy with.” John said, “Easily, we are going to be starting ten days earlier than normal, which will be around April 15 to the 20. Right now, Troy reports that he has pre-packs in the ground, so we expect that sizing is going to be larger as well.” With the earlier start, John said that their Imperial Valley program could be one-third of the way complete by May 1.

California/Bakersfield
Steve Gill with Gills Onions in Oxnard, CA said that the early onions in Bakersfield, CA while still small, “have very good stands and they should be ready to harvest in June.” He said, “Everything looks really good there, and the crop looks great.” Steve added, “Last week we finished planting our summer/fall onions in Bakersfield, so we are all set for the area.”

Washington
Brenden Kent with Sunset Onions in Prosser, WA said that Sunset will begin planting on schedule around March 5. “No matter what the weather, we always stick to our plan,” Brenden said. “It’s better for us if we set a schedule and stick to it, instead of taking advantage of a few nice days to try and get in early.” Brenden said that Sunset will keep the same program, colors, and acreage that they planted in 2017.

Idaho-E. Oregon
Herb Haun with Haun Packing in Weiser, ID told us that the Hauns will start planting in March. “We plan to have a normal start,” Herb said. “We hope that our volume will be back to normal for the season, but we plan to have the same program for acreage that we have planned for in the past.”

Vidalia
Danny Ray with Ray Farms in Glenville, GA said, “The crop is progressing nicely. We are down about 15% on our stands that were lost during the freeze, but we will have plenty of supplies, that’s for sure.” Danny told us that harvest might be a little late. “It’s hard to say right now when we will start harvest,” he said. “We have had above average temps lately, and the crop is responding well. We might catch up.” 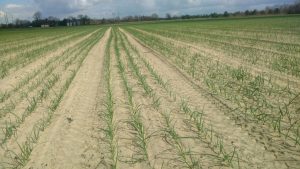 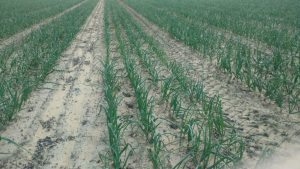 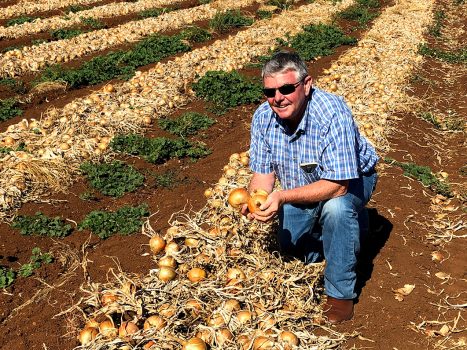 Photos from “Down Under” Davenport Tasmania Harvest Moon Farms