Market and Crop Update for January 11

MARKET
Idaho-Eastern Oregon:
Dwayne Fisher with Champion Produce Sales in Parma, ID, said on Jan. 10, “Demand has been very good this week for us, and while freight remains tight and high, we are able to reduce the long list of truck needs to a short list.” Dwayne added that larger sizes continue to be in heavy demand. “Big stuff is in hot pursuit,” he said. “Colossals and supers are very tight, and we have turned away a lot of business on these sizes. We have been able to get a nice up-charge for these sizes, way above the standard 50 cents to $1 up from the jumbo price.” He said the market is very steady, “with increased prices on large sizes. We feel there is still a lot of potential for this market as we finish the last half of our shipping season.” Quality remains “fantastic,” Dwayne said, and he added, “We have remained on our run schedule to supply our customers until the end of March. Our Utah production is off one-third, and the supplies that we have remaining in this region will be depleted by the first of February, requiring all our volume to come back to Idaho.”

Herb Haun with Haun Packing in Weiser, ID, reported that this week demand is steady. “We have greater demand for larger sizes in yellows,” Herb said. “The market is steady and really hasn’t changed much in the last several months. Really transportation is dictating movement.” Herb said quality remains good. “We have had very good quality all season long,” he commented. And Herb said, “We expect to be finishing up in early March, which will be ahead of normal by a week or two.”

Idaho-Eastern Oregon/Washington:
John Vlahandreas with Wada Farms in Idaho Falls, ID, reported from his office in Salem, OR on Jan. 10 that demand remains very good. “The market is also very stable right now,” John said. “Of course, we will have to see how that goes with the transportation situation. This freight problem could end up being the thorn in our season.” John said that customers are going to have to get used to paying more for their onions as a result of the transportation issues. “It’s boiled down to where shippers can’t help out anymore, and customers are going to have to accept the fact that there are going to pay more for the product,” he said. He reported quality as “status quo,” saying, “I haven’t seen any problems and it looks to be that any issues that shippers may have had earlier in the season have all been worked out.”

Northern Colorado:
Ryan Fagerberg at Fagerberg Produce/Fagerberg Farms in Eaton told us Jan. 10, “Movement is a little better than expected, which is likely due to trucks being so tight. We still have all colors and sizes and now have eight to 10 weeks of remaining storage crop, which is heavier to mediums. Pricing is still good/steady, but it is all relative to getting a truck.” When asked if the electronic logging device mandate is contributing to the shortage, Ryan said, “Yes, no question.” He added, “I think there is a chance trucks may loosen up in a few months simply due to the fact that warmer weather will enable much of the country to load vans and flatbeds.”

Western Colorado/Utah:
Don Ed Holmes with The Onion House in Weslaco, TX, said on Jan. 10 that business in both Western Colorado and Utah has been “rockin’ and rollin’.” Don Ed added that both regions are cleaning up, with Colorado’s last load going out this week and Utah finished by the end of the month. “Business has been really good, though, and the truck deal is better now than a week ago,” he said.

Washington:
Brenden Kent with Sunset Produce Co. in Prosser told us Jan. 10 that demand is good this week. “We had high demand last week, and we are seeing very good demand this week as well,” he said. “The strongest demand is for jumbo and colossal yellows, but we also have decent demand on the smaller onions. Along with good demand, the market has remained steady too.” Brenden said transportation is gotten somewhat better. “Truck availability has gotten a little better this week, but it’s still tight,” he said. “Of course, up here we have ‘Cold Connect’ and it has been running on time.” Brenden said that availability on all onion sizes is good. “We definitely aren’t sitting on any onions, but availability is good depending on what the customer wants,” he said. “I must say we do a lot of planning and we have daily meetings to make sure we have a handle on availability. The goal is to have onions through our normal shipping period which is through early to mid-May.” Quality is very good, he said, adding, “We have had normal winter weather, which helps the onions store really well.”

CROP
California Imperial Valley:
John Vlahandreas with Wada Farms in Idaho Falls, ID, reported from Salem, OR, Jan. 10 that the crop is doing well in the Imperial Valley. “When I was down there several weeks ago, things looked good,” he said. “The reports are that the crop is coming along nicely. Everything looks good for an April 3 start date.” John said recent weather has been conducive to good yields. “Unlike the rains and mudslides to the west, the Imperial Valley hasn’t had any problems with weather,” he said. “While we may have less in the ground, barring any unforeseen weather issues ahead, it’s expected that the yields will be higher than last year.”

Robert Bell with Western Onion in Camarillo said the Imperial Valley crop is “coming along at a normal pace,” and he said a new grower group in the area could bump up the acreage. He said an early April start is expected, and the area generally expects to clean up around Memorial Day.

California Central Valley:
Robert Bell with Western Onion in Camarillo said on Jan. 10 the last of the short-day onions are planted, and the remainder of the crop will go in until March. The early onions will start the first part of June.

New Mexico:
T.J. Runyan with Mesilla Valley Produce in Las Cruces said on Jan. 10that Mesilla’s New Mexico crop is progressing nicely. “Early on there were some bouts of rain that created some thinner stands,” he said. “But overall we’re pleased with the way the crop looks.” T.J. said it’s too early to tell when the season will kick off. “We need to get through January and February so the crop can really start growing before we make determinations about harvest dates,” he said.

Texas Rio Grande Valley:
Don Ed Holmes with The Onion House in Weslaco said the weather has been “clear and cool,” and the dormant onion crop will “wake up toward the end of the month when the temps warm up.” He said nights will warm up above 60, and days 15 degrees warmer than that, which will get the onions growing. “We look to start shipping the last week of March,” he said.

Mexico:
Don Ed Holmes with The Onion House in Weslaco, TX, said he’s been moving a few loads of white onions from a growing region south of Mexico City, but the real season will get going Jan. 23 or 24 with sweets out of Tampico. “The growers irrigated one more time to get size,” he said, adding that the onions are heavy to jumbos, with 80 to 90 percent that size. Whites will start out of Tampico in early February, and reds will follow during the second week of February. “Weather has been really good,” Don Ed said of the growing season.

Many thanks to Washington onion grower, Conrad Williams for sending this great shot of onion sampling this week: 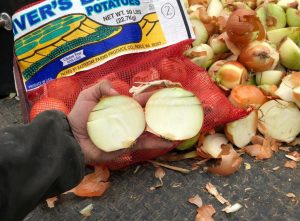