MARKET
California Five Points:
John Vlhandreas with Wada Farms in Idaho Falls, ID, reported that he is finishing up his desert deal with Troy Caston and is shipping out of Five Points this week. “Demand is very good this week,” John said. “Reds are super active and should remain that way for the rest of the summer.” He added, “Transportation continues to be really tough.” John also said the Five Points quality is very good so far, and all sizes and colors are available. Wada will be shipping out of Five Points until mid-August.

California/New Mexico:
Rick Minkus with Minkus Family Farms in New Hampton, NY, told us that demand is steady this week. “The trucking situation is terrible unless you can get one, and then it is fantastic,” Rick laughed. He added that the market for yellows is “okay,” adding, “The bright spot right now is the red market, but again the freight rate has a lot to do with pricing, which can end up being all over the board.” 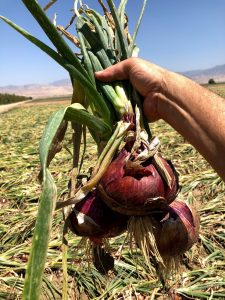 California Imperial/Central Valley:
Robert Bell with Western Onion Growers in Camarillo told us June 20, “We are currently harvesting white onions in Brawley, where quality is excellent. We also have excellent reds and yellows to harvest, but the market being what it is we will probably leave them. We will finish harvest in Imperial on Saturday or Monday. We cannot get trucks or customers to come south any longer.” Robert added that Central Valley onions are coming in as well. “We are also harvesting in Bakersfield,” he said. “The organic red onions yield is huge, and we will start bleeding some off into the conventional market, which is strong at this time. We will start our organic yellow onions in Bakersfield early next week.” Many Thanks to Robert Bell for this week’s feature image of California Organix reds.

New Mexico:
Trent Faulkner with L&M Companies in Raleigh, NC, reported from their New Mexico sales office in Deming on June 20. “Demand right now is very, very good,” he said. “We are working with some transportation issues, but it’s nothing we aren’t prepared for, so we have been very blessed so far with our New Mexico deal.” Trent said that the market for reds is “hot,” adding, “We just keep seeing the market for reds climb. The market for jumbo reds is extremely good, and the market on yellows is good too.” He added that quality is nice, with yellows being particularly “outstanding.” Trent commented, “We are making almost no No. 2s right now.” When asked about availability, he said L&M is in a gap on whites right now and are buying them but will have whites out of the Deming operation around July 1. “We are tight on reds, but supplies on yellows are good.” And Trent said L&M will be shipping out of New Mexico until mid-August.

New Mexico and Bakersfield, California:
Jason Pearson with Eagle Eye Produce in Nyssa, OR told us that demand is extremely high this week. “This week is great!” he said. “Demand is tight on reds, and the pricing is going up fast for reds and whites. Demand is very solid on yellows too.” Jason added that quality is outstanding. Eagle Eye will be shipping out of both areas until mid-August. He noted that he is actively recruiting for two new salespeople who will be working for him out of the Nyssa office. OnionBusiness.com will bring you the new hire announcement when the selection has been made.

Broker’s Perspective:
Rick Green with Greener Produce in Ketchum, ID, reported on his third day into the business that his company is currently pulling onions for customers out of California, New Mexico and Arizona. “Basically, we are getting onions for customers from the areas that have the best fit for size and quality,” Rick said. “Right now, we are seeing high demand for smaller onions on all colors. The market is steady for yellows, and the red market is on the rise, with some great potential for a continued market increase on smaller reds.” When asked about transportation, Rick said, “The only way to describe it is ‘tight to impossible.’” To visit Rick’s new brokerage venture, Greener Produce, click this link. 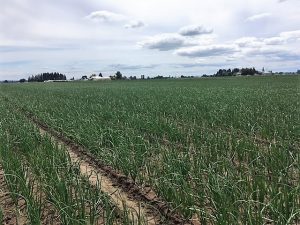 CROP
Oregon:
Trish Lovell with Curry and Co. in Brooks, OR, told us June 20, “The crop is really progressing well. Weather here has been perfect. We should be right on schedule for harvest around the first part of August.”

Northwest:
John Vlhandreas with Wada Farms in Idaho Falls, ID, told us on June 20 that Wada’s Northwest growers have reported the crops look very nice and are growing well. “Things are looking good up there, and we are on track to get started in late July,” he said.

Idaho-Eastern Oregon:
Jason Pearson with Eagle Eye Produce in Nyssa, OR, reported June 20 that the Idaho-Eastern Oregon crop is “beautiful.” He said, “The crop looks to be much better than what we had last year and is considered normal in size. We are looking to get going on our IEO program around the second or third week of August.”

Northern Colorado:
Hail hit north of Denver on Tuesday, June 19, with reports still coming in on Wednesday. Bob Sakata with Sakata Farms in Brighton said, “We were spared, and everything is good with our onions.” Commenting on some erratic weather patterns, the longtime farmer said, “We decided to be dumb farmers, so this is what we deal with.”

Kansas/Washington:
Trent Faulkner with L&M Companies in Raleigh, NC, reported the L&M Kansas crop is progressing nicely. “We have had quite a bit of rain, which may delay us a bit, but overall the crop is looking really nice,” he said. “We are really excited about our Kansas program. With all of the transportation issues, it great that those onions will be shipping from the middle of the United States, Ulysses, KS. That’s going to really help with freight.” Trent also commented that L&M will be selling the Franzoy Washington onion crop toward the end of August, and things there are going very well.

New York:
Rick Minkus with Minkus Family Farms in New Hampton reported the New York crop looks good. “We are a little dry right now and could use some rain,” Rick said on June 20. “We have also been cooler with only one hot day this week, which was on Monday. The weather will end up putting us behind a little, but overall the crop looks really nice.” Rick added that Minkus is looking forward to the New York season. “I’m afraid that the freight problems are here to stay, and for us that could end up being a benefit when it comes time to sell our New York onions,” Rick said. “When it comes to transportation problems, we are in a good location to sell our own onions.”