MARKET
New York:
Michelle Gurda with A. Gurda Produce in Pine Island, NY told us on March 13 that A. Gurda is moving all colors and sizes and the demand is very steady this week. “Buyers haven’t been very happy about pricing, but they all know that’s the deal, and they are still ordering,” Michelle said. “They know it’s not just us; it’s everyone. Everywhere. They are pretty shell-shocked about the white market. It’s higher than it has been for five to eight years. Now, the market for jumbo yellows is trending upward and considered very hot right now.” Michelle said quality remains good. “As I mentioned before, we have been pleasantly surprised how the New York onions turned out given the growing weather we had,” she said. Michelle noted that depending on weather, A. Gurda is shooting for an April 10 start date to plant.

Wisconsin:
Doug Bulgrin with Gumz Farms in Endeavor told us March 13, “Demand is exceptional, and it seems like the industry has finally realized the shortage of supply from many factors. Prices are changing daily. This is the hottest market I have seen in the 28 years I have been involved in the onion business.”

Mexico:
Don Ed Holmes with The Onion House in Weslaco, TX, said it’s been an active week for onions. “Everyone woke up on the this,” he said on March 13. “The onion market here has doubled in the last 10 days price-wise. The white deal has been as high as $50-$55, and supplies are very tight.” He said the Tampico growing region is “trying to supply all of Mexico and some of Central America.” South Texas is seeing some onions come in, he said, adding, “We finished the whites for the season, and we’ll finish reds next week. The yellows will be done in two weeks, and then South Texas onions should come right in. There will be a handful of Texas onions from one or two shippers, and we’ll have them the week of March 25.” The weather, he said, has been “unusual” across the country, but he closed saying, “We’re happy happy happy.”

Colorado:
John Harris with Paradigm Fresh in Fort Morgan provided us with both early and mid-week reports. On Monday John said, “We will have to see where this market finally shakes out this morning after one the wildest finishes to a week I have seen in my career.” He added, “Everything is tight, and most shippers are nearly sold out for the week already. I have heard rumors that the Mexican white crop is basically done. If that is truly the case, the next two or three weeks will be interesting as there just will not be any for anyone no matter what the price is.” Then on Wednesday, he reported that the wild ride wasn’t over. “Prices stabilized a bit on Monday and then jumped again yesterday. At this point, I really feel like the FOB market on yellows in the Northwest is going to settle out somewhere between $16 and $20. Demand and not supply will drive this thing. Despite the incredibly low supplies, this thing cannot continue to sustain itself without ample demand. At the moment, this is as good of demand as we have seen this time of year in a very long time and with that, I’d expect to see the yellow price to continue to climb.” John said that reds are pushing hard “considering they have nearly doubled in price in a week. My feel for where that deal is headed is not as clear, but it seems that the red deal is maybe shorter than the yellows. Whites have topped $50 on new crop with the storage crop whites being basically finished.” He said the industry has “established with past markets that we can maintain a $50 white market for a period of time. The threshold is probably near $50, but my gut says with as short as it is, this market will set a new high mark in the coming weeks and we will probably see FOB’s continue to climb slowly.” And, looking out his window, John said Eastern Colorado was preparing for a blizzard that will likely affect trucks, but things should be normal by Friday.

Idaho-Eastern Oregon:
Jason Pearson with Eagle Eye Produce reported from his Nyssa, OR, office on March 13, “Demand is over the top this week. Mediums are really tight, and demand for supers, colossals, and jumbos is extremely high. The market is also excellent. It has gone up and has room to get higher. While we do have to be mindful of how Mexico responds to the increase, the market is moving upward and has some room to increase.” Jason noted that quality remains good. “The onions are in good shape, and we will be shipping the full month of April,” he said. Adding, transportation has been OK. “Basically, it’s load ‘em when you can get ‘em,” he said. Jason also said the Treasure Valley weather forecast “looks to be drying up, and growers will be planting soon.”

Dan Phillips with Central Produce Distributors in Payette, ID, told us on March 13 that demand is extremely strong. “We are down to yellows, but demand on those has been excellent,” he said. “It’s so good that I am not taking any business today so I can get caught up.” Dan said the market is strong. “The market has increased and is on the move,” he said. “Our quality is absolutely fantastic and will be right until the end. We should be finishing in about three or four weeks.” Growers will be planting soon, and Dan said, “They are all geared up and ready to go. They were actually in the fields yesterday and had a little rain, so they stopped, but the weekend is supposed to be nice, so it won’t be long.”

Herb Haun with Haun Packing in Weiser, ID, told us March 13 his shed is “getting real close” to finishing, and he expects final loads to go out next week. Herb noted that others in the region “who have onions now have decided to hang on for better pricing.”

Columbia Basin:
Jared Gutierrez with Columbia Basin Onions in Hermiston, OR, told us on March 13 that demand “is crazy hot, and we cannot sustain all the calls that are coming in.” He went on to say that it “makes things exciting but challenging at the same time to take care of customers.” Jared said, “Medium yellows still remains strong, but jumbo yellows have made a strong surge in demand. Reds are gaining strength, and of course, whites are off the charts.” He continued, “The market really gained some momentum these last several days and will continue as supplies continue to thin out in certain regions. It will finish strong for our season, but let’s not get too ahead of ourselves, especially with planting season around the corner for the Northwest and other sectors.” Availability at CBO is good “in all colors except for whites, which are limited. We have had good quality this year and should finish that way.” And he said transportation “has been really good as of late with availability. As for weather… we are finally seeing the sunlight, and the snow is melting away. Although we have experienced some delay, we should see some field work and planting starting soon!”

Washington Hybrids/General Sweet Market:
Dan Borer with Keystone Fruit Marketing reported from his office in Walla Walla, WA, on March 13, saying, “Demand for hybrids right now is dynamite. Many were predicting, this earlier and those predictions have come true. When you combine global supplies being off, fewer acres being planted and short crops due to weather, it’s almost the perfect storm. And it’s likely to continue into early summer. For what’s going on now, you can’t really blame Mexican growers. They are going to take the least amount of risk with the most opportunity, and that means they are going to sell domestically from the farm.” Dan continued, “Another factor is that the economics for onions haven’t been that great the last couple of years, so growers everywhere have planted less, particularly with whites that are traditionally more difficult to grow. This upswing in demand and the increasing market rolls right over to sweets as well. Again, with reduced overall supplies now and moving forward, it’s going to be early summer before things change for hybrids or sweets. And unlike my previous years selling grapefruit, everyone needs onions, and they will buy them. So for the foreseeable future, you’re in a tough spot if you need onions and in a great spot if you have them.”

Broker’s Perspective:
Jason Vee with Vee’s Marketing in Superior, WI, wrote to us on March 13, “Where do I even start? This is a wild time. This market is for real.” He continued, “It appears as though we will be in short supply through April. It’s certainly more fun to trade in high markets than low, flat ones. I normally look forward to scarcity. We are a 30-year-old, strong company with good pay and trade practices. This is when slow pay and poor trade practices take a big back seat in procurement.” But, Jason said, “Here is the rub: I’m not getting enough onions either. I’m covering commitments, but I’m not able to take advantage of my buying power like I have in other up-market situations. That’s mostly due to my reliance on open markets. I’ve talked about this in previous market updates. Contracts get serviced first. The open market is second. I had a conversation with a gentleman this afternoon about contracting this summer. He’s a food processor that got into onions only a year ago. His question to me was what do I think this market is going to do in May, June, and July so he can decide whether to contract or not.” He said, “I think my answer surprised him. Contracts guarantee supply. Or they guarantee supply up to the point where Act of God clauses take over, like weather or storages catching fire. I steer anyone away from contracts that are only using contract price to hedge markets because they are the first ones to quit and give them back when it gets hard. We also see them try to catch up with their neglected volume in up markets. So, I told this gentleman that if he is only contracting to hedge markets, then contracting probably isn’t for him. Conversely, if you are a retail behemoth like Wal-Mart, then guaranteed supply is obviously more important than hedging markets.”

CROP
Northern Colorado:
Robert Sakata with Sakata Farms in Brighton said on March 13 he’s not gotten into his fields yet. “We have the seed ready,” Robert said, noting recent weather has kept the tractors out of the soil. “We have a storm coming on right now,” he said. “It was rain earlier and now snow, and we’re supposed to get eight inches. It’s snowing and blowing today, and my best guess is that it will be late March before we are planting, a little later than normal.” Robert said fingers are crossed 2019 is a better year than 2018, when weather wiped out a significant number of acres at Sakata Farms.

Colorado Western Slope:
Don Ed Holmes with The Onion House in Weslaco, TX, said Western Slope onion grower John Harold told him this week he had good news and bad news. The good news is abundant water for the 2019 crop; the bad news is snow and rain keeping crews from planting. “Normally by now he’d be in the fields,” Don Ed said.

Vidalia:
Check out these beautiful photos of the progressing Vidalia onion crop sent to us from Danny Ray with Ray Farms in Glennville, GA. 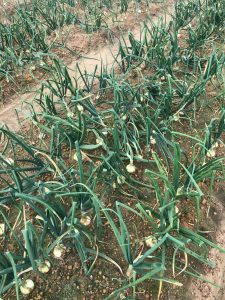 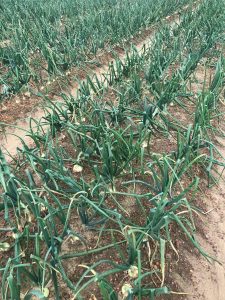 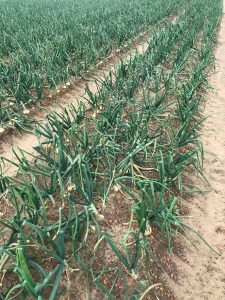