Market and Crop Update for March 15

Washington:
Dan Borer with Keystone Fruit Marketing in Walla Walla reported March 14 that Keystone is shipping yellow and red hybrids out of Washington. “We are finished with whites, but that’s the case with most Northwest shippers,” Dan said. “Our quality continues to be very, very good, and we will be shipping all of April and into May.”

John Vlahandreas with Wada Farms in Idaho Falls, ID, told OnionBusiness that Wada’s Prosser shipments will start winding down toward the end of this month. “We will start finishing with open onions then,” he said. “After that, we are looking at mostly contract stuff.” John noted that quality remains excellent, saying “It’s been a great season for these guys and we haven’t had any issues.”

Idaho-Eastern Oregon:
Steve Baker with Baker & Murakami Produce in Ontario, OR, told us demand this week has been “fairly good.” Steve said, “Our shipments the past four or five weeks have been very consistent week to week.” He added that demand on all sizes has been good, noting, “Maybe a little more demand this week on the larger sizes than last week.” He went on to say, “We have good availability on yellows and reds. The quality has been very good. We will be pulling out of cold storage around mid-April. We should have three or four weeks of supplies out of cold storage.” The market is steady “so far this week,” and Steve said availability on trucks is also good. “Rail cars are more readily available than in previous weeks,” he noted.

John Vlahandreas with Wada Farms in Idaho Falls, ID, reported to OnionBusiness from his home office Salem, OR, on March 14. “The market has been steady,” he said. “At this point, we are looking to sell the balance of the remaining onions. The onions are still looking gorgeous, and we should conclude shipping out of Nyssa about the second week in April.”

Dwayne Fisher with Champion Produce Sales in Parma, ID, weighed in with a market report this week, telling us on March 14, “The last two weeks have been very good demand for our group. We have finished all production in Utah and will have Tamura’s done by the end of the month. Our two Champion facilities will go as planned until April 20 to meet our customers’ needs. We haven’t lost any of our normal customers to Mexican product, but we certainly have felt the additional supply from that region as it has brought our FOBs down. That being said, I feel our region did a good job marketing this crop this year. While we had control of our supply, we were able to get decent returns for our farms and growers. The transportation issues, and now foreign product on the market, are out of our control, and now we are forced to react to the increased production pressure. I feel it demonstrates to the industry that we are going to market our supplies, regardless of what they are, in a manner to ensure our customers are taken care of well into April, and there really isn’t any need for a bunch of non-domestic supply. It reminds me of the potatoes I used to market in this valley. We had a sweet six-to-eight-week gap that we filled each year when Eastern Idaho finished up their supply for the season. Then better-growing practices and technology allowed them to store longer and increase yields, and that gap went away. It got to the point there was nowhere for us to market our potatoes, and now that fresh pack industry in the valley is no longer. Our growing practices and technology just keep advancing and our customers certainly want to stay with us as long as possible. The product we are finishing the season on is very strong, and that too has helped maintain and even increase our customer base.”

Wisconsin:
Doug Bulgrin with Gumz Farms in Endeavor said, “Demand has been increasing as growers finish up in Wisconsin, We will have a good supply of quality med and JBO yellows into early May.” Doug also said, “Our crews are preparing planting equipment as spring approaches. Snow has all melted and fields are starting to dry out.”

Texas:
Dan Borer with Keystone Fruit Marketing in Walla Walla, WA, told us that Texas 1015s are shipping in low volume. “We have a similar situation to Mexico, and the Texas crop is delayed due to weather,” Dan said. “There are few 1015s that are being shipped, but primarily they are staying in the Texas area.”

Mexico:
TJ Runyan with Mesilla Valley Produce in Las Cruces, NM, told OnionBusiness on March 14 that Mesilla Valley is currently shipping product from Mexico. “Demand is incredibly strong for all sizes in yellows in all sizes,” TJ said. “We are getting in more reds, and we have whites too. So all colors are available. We also are pleased with the quality. It’s been very good.”

Dan Borer with Keystone Fruit Marketing reported from his Walla Walla, WA office on March 14. “We are transitioning from our Peru crop to Mexico,” he said. “Timing has been a little delayed due to weather, but the quality is looking very, very good.” Dan said the slight delay hasn’t been an issue. “We have ample supply so there really hasn’t been any real hiccup in the transition.” He added that the Mexico crop has great volume. “Only a handful of Mexican growers produce sweet flat onions, and we will have good volume of those. Overall we are looking at large sizes out of Mexico this season.” Dan said the market could be termed as “fairly traditional” this season. “We really don’t have any extreme spikes or extreme lows on the market, so the market is pretty normal.”

Dale DeBerry with AllVeg Sales in Bourne, TX, said his own Mexico deal hadn’t started yet, but he is helping Costa Oro in Alamo, TX, with its movement of Mexican onions. “My onions will start next Tuesday or Wednesday, weather permitting,” Dale said. The Tampico crop he handles was planted in November, and he said rain has hampered the progress somewhat. Once it starts, Dale expects the Mexico deal to run through April 25.

Broker’s Perspective:
Jason Vee with Vee’s Marketing in Lake Nebagamon, WI, told us March 14, “I can’t say I experienced a big onion holiday-pull for 2018 Saint Patrick’s Day. Maybe the corned beef and potatoes guys did better than onion people did.” Jason added, “On the bright side, the market has leveled off after a couple weeks of decline. Quality is very good overall in the Northwest and South Texas. There are still deals on storage onions from shippers looking to avoid holding onions through May. Quite a few onion contracts finish March 15.” He continued, “Over the next two weeks, Midwest receivers will transition from storage to new crop. Those things spur some movement and variability in onion trading that create opportunity, certainly more variability than January or February. It’s not the March home-run that the Northwest was looking for, but they held relatively high markets for most of the season.”

California Imperial Valley:
John Vlahandreas with Wada Farms in Idaho Falls, ID, told us March 14 after his return from the Imperial Valley that “The crop looks absolutely fantastic.” He said, “We are excited because this year we will be packing out of the shed rather than field packing, and we should have the lineup and running in time for an April 20 start date.” John said that grower Troy Caston’s onions should have a large size profile. “Right now, the onions are about two inches in diameter, so we are going to have a lot of big onions,” he said. “This should bode well for our finish in the Northwest and make for a smooth transition to California.” Many thanks to John for sending photos he took last week of the Imperial Valley crop.

Idaho-Eastern Oregon:
Dwayne Fisher with Champion Produce Sales in Parma, ID, told us March 14, “All of our farms and growers have started planting. The soil conditions are excellent, and the rain we received last night is just what we were praying for.”

Steve Baker with Baker & Murakami Produce in Ontario, OR, said on March 14 that the company’s farmers have begun planting for the 2018 new crop.

Northern Colorado:
Ryan Fagerberg with Fagerberg Produce/Fagerberg Farms in Eaton told us on March 14, “Planting began here in Colorado a few days ago for us. We are planting roughly the same amount of acres as last year, and we will have a few more acres of organics and a few less acres of set onions.”

Bob Sakata with Sakata Farms in Brighton said on March 14 that Robert T. Sakata, sole owner of the operation, is direct seeding onions “every day and will finish planting in early April.” Sakata Farms recently ceased its sweet corn production and is focusing entirely on onions as a vegetable crop, and Bob said, “This year without sweet corn we will probably start shipping onions in mid-August.”

New Mexico:
TJ Runyan with Mesilla Valley Produce in Las Cruces, NM, reported the company’s New Mexico crop is looking good. “The onions are starting to wake up, and they are growing well,” TJ said. “There may be some New Mexico onions out there are around May 5, but realistically we are looking to get going with New Mexico around June 5.”

Texas Rio Grande Valley:
Dale DeBerry with AllVeg Sales is working with Costa Oro on its Texas crop, which he said will start shipping the end of next week and run through the end of April. “It’s warmed up here, but we haven’t had extended heat,” he said from his Bourne office.

Vidalia:
Dan Borer with Keystone Fruit Marketing in Walla Walla, WA, reported on March 14 that the Vidalia crop is slightly behind. “Like some of the other Southern growing areas, Vidalia has had cooler temps and moisture,” Dan said. “The Committee is currently meeting on a start date, but due to the weather, the start probably won’t be an early one. The thing about sweet onions is that things can change dramatically within the last 30 days, so it’s really hard to target and an exact date until we get closer.”

Dale DeBerry with AllVeg Sales in Bourne, TX, said on March 14 he would be leaving for Georgia at the end of the Texas Rio Grande Valley deal, to work Vidalias with B&B Farms. “I’ll be there in early May,” Dale said of his trip to Georgia. He added, “The crop looks good, according to the grower.” Dale said overall this year “a lot of crops are good, but some of the earlier crops were hit by cold weather and didn’t do as well.”

Many thanks to Robert Bell for providing the featured image of the Imperial Valley crop. 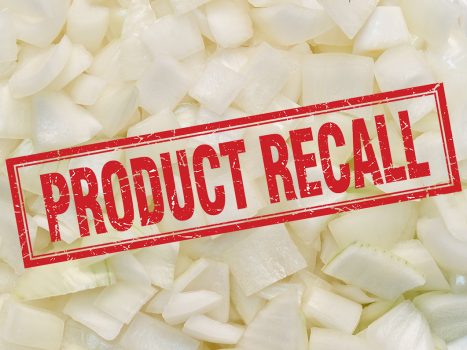