MARKET
California Imperial Valley:
Jessica Peri with Peri and Sons in Yerington, NV, said the company is about halfway through its El Centro harvest. “Organics came off two weeks later, and our first day of shipping our own organics was May 7,” she said. Commenting on recent high temps, Jessica said, “It’s been manageable, and overall we’ve seen decent sizing.” She said the onions are trending “definitely jumbos for reds and whites and mediums and jumbos for yellows.” Harvest will wrap up in a couple of weeks, and Jessica said the deal will go for another several weeks before transitioning to Firebaugh in the San Joaquin Valley. Currently the market, she said, “Is in the tank.” Citing a full pipeline and onions shipping from several regions at the same time, she said current demand is slow, and the market is slow.

Dan Borer with Keystone Fruit Marketing in Walla Walla, WA, reported that Keystone just started in the Imperial Valley this week. “We are in transition mode,” Dan said. “We are off to a good start, and the crop looks nice. Right now everyone is watching the temps, and it’s getting pretty warm there, but that is not unusual for the California desert.”

Northwest/WA/OR:
Dan Borer with Keystone Fruit Marketing’s Walla Walla office reported that shipments out of the Northwest may continue through the end of May. “I am really happy to report that we’re still shipping good quantities out of the Northwest,” he said on May 9. “Pricing is stable, and the quality has been exceptional. It’s a great situation for customers looking for storage hybrids with good quality.”

Texas:
TJ Runyan with Mesilla Valley Produce in Las Cruces, NM, told us on May 9 that MVP is shipping out of the Texas Rio Grande Valley. “We will be shipping out of there for the next two to three weeks,” TJ said. “We are shipping all colors and the size profile is larger, mostly jumbos. We have been very happy with the quality this season.” Like others in the industry, TJ said the market right now is a “disaster,” adding, “Really, there is no better way to put it. Everyone is under extreme pressure and just looking for an edge, but the reality is it’s going to take about two weeks for the pipeline to empty out for things to get better.”

Don Ed Holmes at The Onion House in Weslaco told us on May 9 the market is lacking “spark,” but he said with some regions cleaning up conditions could improve. “A few Texas guys are finishing up now. We will be done clipping on Tuesday and will finish shipping late next week,” Don Ed said.

Mexico/Chihuahua:
Don Ed Holmes with The Onion House in Weslaco, TX, told us he’d gotten his first loads of whites from Chihuahua on May 8, and he said, “They are gorgeous, and it looks like around the time when we finish with Texas, we’ll have reds and yellows from Chihuahua as well.” The Chihuahua onions will run through the third week of June, he said.

Vidalia:
Dan Borer with Keystone Fruit Marketing reported from his Walla Walla, WA, sales office on May 9, “Despite the adverse winter weather conditions, the crop has very good quality and has good volume. We had a sales meeting just this week, and we heard straight from the growers that this crop is very promotable for our retail customers.” He continued, “Pricing is attractive, and the sizing is right at that sweet spot for promoting jumbos.” Dan said Vidalia is at peak production for fresh harvest. “We will have a normal production schedule and will continue with fresh through the end of May before going to storage.”

Broker’s Perspective:
Jason Vee with Vee’s Marketing in Lake Nebagamon, WI, told us May 9, “The landscape is changing.” He said, “I’m confident that there are no whites left in Washington, a few reds and probably enough yellows for three more weeks. Midwest yellows seem to be in their last week or so of packing. We really need some of these districts to finish. This is just too many districts going at one time. So, the landscape is changing. We just need it to move along a little faster.” Jason went on to say, “Freight is back on my list of problems to deal with again. I thought we had this sorted out where we had a market correction of 5-7 percent over last year. But some lanes are proving that to be a stupid assumption. I paid $4,750 today for a lane that I paid $3,400 for last year. It’s making delivered pricing a real liability.” He continued, “I’m turning away some freight contracts for the same reason. It’s too unpredictable. And layovers are more expensive than ever because the clock never stops.” Jason said, “I had a conversation this morning about giving away all the profit of a load on an overnight layover. Then I’m just doing it for practice. And I’ve been here long enough that I don’t need the practice.”

CROP
California San Joaquin Valley:
Jessica Peri with Peri and Sons in Yerington, NV, said on May 9 the operation will transition from El Centro in SoCali to Firebaugh in early June. “We will ship all sizes and colors from the start of the season,” she said. Jessica said the onions are progressing well, and the season “seems on target.”

Texas/Winter Garden:
TJ Runyan with Mesilla Valley Produce in Las Cruces, NM, told us the Uvalde deal will start up May 17 or 18. “We are very excited about our Uvalde crop this year,” he said. “Given the last several years of weather issues, it’s great to see the crop turn out so well.”

New Mexico:
James Johnson with Carzalia Valley Produce in Columbus provided great crop photos and told us May 9 the operation will start harvest in a couple of weeks, with shipments commencing around Memorial Day. “Right now we’re on cruise control,” he said. 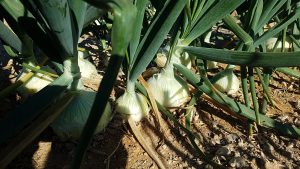 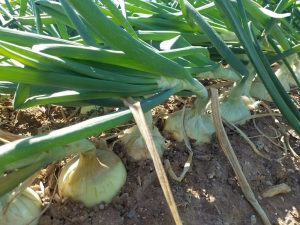 “Weather has been good. High temps have speeded things up, and we’re looking at starting in two weeks.” James said labor has been good so far. “We’ve had labor for our weeding crews, and applications in the packing shed have exceeded last year’s by 20 percent so far. I attribute that to a good work environment,” he said.

TJ Runyan with Mesilla Valley Produce in Las Cruces said on May 9 the MVP New Mexico crop is looking “really nice.” He said, “We will get started in New Mexico around June 5. The crop will start out good and will just get better and better as we get into the season.”

Oregon:
Trish Lovell with Curry & Co. in Brooks said on May 9, “Weather has been very favorable here. We are not experiencing the extreme wet spring as was last year, and we are definitely enjoying this sunshine. The crop is planted, both seeded and transplants and the stands are looking very good.” Trish added, “We have our program acres in line with last year’s.”

Colorado Front Range:
Bob Sakata with Sakata Farms in Brighton said on May 9 the onions lost to winds in April have been replanted, and the season is on track for a normal run. “Everything is in, and it’s going well,” Bob said. “We will be on time for our harvest that will start in August, and we’ll have some later onions as a result of the replanting.” The onions that were not lost to the wind are doing very well,” he said.

Walla Walla, WA:
Dan Borer with Keystone Fruit Marketing reported that the Walla Walla crop is looking great. “The crop is coming along well,” Dan said. “We have had good growing weather and good water supplies, so we expect a good season for the Walla Walla crop.” Also, many thanks to Dan for providing this week’s featured image of the latest look at Keystone’s Walla Walla, WA crop.