Market and Crop Update for May 11

Dan Borer with Keystone Fruit Marketing in Walla Walla, WA, told us May 10 quality out of the Imperial Valley has been very good. “I talked to one of our growers yesterday, and the quality is very nice this year,” Dan said. “I am headed down in two weeks to get a first hand look and will provide more feedback then.”

Robert Bell of Camarillo, CA-based Western Onion Sales told us crews had some delays due to wind over the weekend and light rain earlier this week, but harvest of organic whites continues and onions are being shipped.

John Vlahandreas with Wada Farms reporting from the Imperial Valley told us demand is exceeding supplies this week, and Wada is working hard to keep up with orders. “The onion quality is absolutely outstanding,” he said. “Demand for jumbo reds is very good, and everyone is trying to get medium reds. Our whites are just beautiful. Honestly, the market should be higher than what it is right now, and we expect it to get better.”

Photos below courtesy of John Vlahandreas

Michelle Gurda with A. Gurda Produce in Pine Island, NY, told us Gurda is shipping some of its 2016 onions, but 75 percent of the shipments now are coming out of California and Texas. “Demand is pretty steady overall, but it’s a little tighter and stronger for jumbo reds and even more so on medium reds and jumbo whites,” Michelle said. “The market has been steady and on the rise for medium and jumbo reds and jumbo whites. The quality has been good, and we really haven’t had any issues.”

Washington:
Dan Borer with Keystone Fruit Marketing in Walla Walla, WA, said Keystone is winding down its Washington hybrid crop. “Quality is holding, and our availability is mainly medium to jumbo yellows and reds,” he said. “We should be finished shipping toward the end of the month.”

Larry Bauman with L&L Ag Production in Connell told us on May 10, “We are still shipping, and this variety is the best we’ve had all year.”

Idaho-Eastern Oregon:
Chris Woo with Murakami Produce Co. LLC in Ontario, OR, told us demand this week is fairly light. “We still have customers that have stuck with us, but most buyers have made the switch to Texas and California,” Chris said. He told us May 10 the market is steady this week. “We have a good supply of yellows in all sizes, and the quality is really nice coming out of the ice-box. Frankly, if the quality wasn’t good, we would have already pulled the pin.” Chris said Murakami finished with reds on May 9, but the company is shipping reds from Washington. He said he expects Murakami to will complete packing at the end of next week, but that is subject to change.

Ashley Robertson with Fort Boise Produce in Parma, ID, said that operation is shipping “this week and next week,” and she said they could wrap up around May 20. “We just started on a new lot in cold storage, and we’re pleased with the quality,” she said. Fort Boise is shipping yellows and reds, mostly jumbos with some colossals and supers.

Mexico/Texas:
Dan Borer with Keystone Fruit Marketing in Walla Walla, WA, said Keystone has completed shipments out of Texas and Mexico. “We had a great season with our Mexico crop,” Dan said. “The quality was outstanding. Like most Texas/Rio Grande growers and shippers, we were disappointed with this year’s Texas crop.”

Vidalia/Georgia:
Dan Borer with Keystone Fruit Marketing in Walla Walla, WA, said on May 10 Vidalia movement has been strong, but pricing has been lower than what it should be. “We are going to see an early finish to the fresh harvest,” Dan said. “In fact the early harvest has started to finish up as we speak.”

Dale DeBerry with AllVeg Sales in Bourne, TX, said he’s home for a respite in the Georgia round onion deal he’s been working. “I’ll be back down there right after the first of June and will run the onions through that month.”

CROP
Washington:
Dan Borer with Keystone Fruit Marketing in Walla Walla said the Walla Walla crop is looking very nice. “We are starting to get some warmer and dryer weather which is helping the crop,” Dan said. “We are looking to have a very good year, with normal yields and normal harvest that will begin in late June.”

Larry Bauman with L&L Ag Production in Connell said on May 10, “The new crop is progressing well even though we always worry.”

Photos below courtesy of Larry Bauman

Idaho-Eastern Oregon:
Chris Woo with Murakami Produce Co., LLC in Ontario, OR, said the crop for Murakami’s growers is looking very good. “The crop is late, but we are seeing good stands,” Chris said on May 10. “We have had some inconsistent weather, and it is going to be warm for the next couple of days and then expected to cool off. We’ll just have to see how the summer progresses on timing, but we do expect to have early onions at the end of July or the first part of August.”

Kay Riley with Snake River Produce in Nyssa said that part of the Treasure Valley had localized heavy rain and hail, and some growers could be looking at “long-lasting effects.” He also noted that planting was stretched out over two months because of weather delays, which he said is “not necessarily good or bad – it really remains to be seen.”

Northern Colorado:
Bob Sakata of Sakata Farms in Brighton told OnionBusiness.com on May 9, “We had bad weather here yesterday, with heavy rain and hail.” He added, “Right now it’s hard to tell what the damage is. It will take a few days to assess things, and we don’t know if growers will have to replant or not.”

Greeley was one of the hardest hit cities, but north of Greeley in Eaton, Ryan Fagerberg at Fagerberg Produce/Fagerberg Farms said on May 9 the family operation was spared hail damage. “All good here,” Ryan said. “We fortunately avoided the hail.” He said the operation will finish planting sets next week.

Amber Strohauer with Strohauer Farms in La Salle just south of Greeley said, “We lucked out, and our onions should be fine.” Some farms both north and south of La Salle were hit, although again the storm’s intensity was localized, causing damage to some areas and missing others altogether.

New York:
Michelle Gurda with A. Gurda Produce in Pine Island, NY, told us May 10 that A. Gurda finished planting on April 28. “We have some transplants which are doing well, but we have planted our direct seeded field, and they are already coming up,” Michelle said. Michelle said though they have been experiencing some cooler than normal weather, the crop appears to be on track. “So far, so good,” she said.

Photos below courtesy of Michelle Gurda 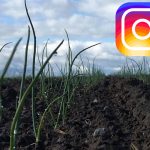