Like more than a dozen onion growing and shipping operations in the Treasure Valley of Idaho-Eastern Oregon, Snake River Produce in Nyssa, OR, saw several of its structures go down under the weight of record snow and ice in the first weeks of 2017.

The storm system, dubbed “Snowmageddon” by those in its wake, actually began in December 2016, and by Jan. 8 enough snow had accumulated that storages and packing sheds started to buckle under the load.

The first to go was in Weiser, ID, and then the losses were like dominoes down the valley. Payette, ID, Ontario and Nyssa, OR, were reporting collapses so numerous that a spreadsheet was posted on line to keep up with the damage. The governors of both states called in emergency snow removal crews as continuing snowfall, cold temps and snow-blocked roads and highways made business difficult for weeks.

Later, when the snow finally started to melt in the spring, muddy fields delayed planting, and some localized flooding became a brief concern. 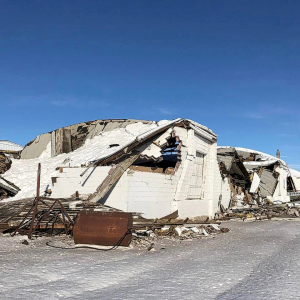 Snake General Manager Kay Riley said the buildings that collapsed were likely built in the mid-20th century. One was a Quonset structure, one was built of cinderblocks and the third was a wooden building.

Now, like a phoenix, the region is rising from the dust and debris.
Kay and Tiffany Cruickshank, who works sales with Kay and also works traffic, told OnionBusiness.com this week that construction started recently on a new packing shed and also a new onion and box storage building.

The packing shed is a 30,000-square feet metal building, and the wooden structure for storage will hold 10,000 bins, Kay said.

Both new structures are at the same location, which is in Nyssa but not on the site where the old shed and offices are located.

“Construction will be completed by Aug. 1,” Kay said. And Tiffany added, “The offices will also move there and will be double-stacked in the packing shed. The sales will be upstairs, and the employee break room and shipping office will be on the base level.”

The existing shed in Nyssa, where Snake has rail siding, will remain operational, Kay said. The new packing facility will utilize the same technology in a separate machine, he added.

“We may pack onions at the old site,” Kay said.

The new buildings are being put up by Martin & Martin Builders, a local company, and updates will be posted on Snake’s Facebook page.

“They pouring the foundations now, and the walls will be up in the next couple of weeks,” Kay said. 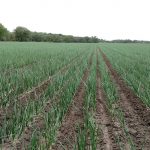 Market and Crop Update for May 11